10 years ago we hosted one of our more memorable Three Imaginary Girls holiday parties {although, I’m sure you agree they have ALL been amazing!}. The weeks leading up to the 2007 TIG holiday party were just as we had hoped/planned:

We had rung all our ho ho ho bells to get the word out about the big night.

As a Dec 24th baby, the then-annual holiday show also acted as my birthday party, so I was bummed on many levels.

We scrambled and stressed and tried to figure out if there was any way for the show to go on.

Then, out of nowhere, I received an email from Dana Sims – booker and owner of El Corazon. He explained that night of December 20, 2007 was scheduled to be the El Corazon staff holiday party, but he had heard about what happened to us and he offered to move their staff party to host our event. Dana Sims then gathered a crew of folks from around town to staff the place for our show.

It’s this kind of gracious spirit to pitch in and gather folks from the Seattle music club community to make sure the benefit show still goes on that gives me warm fuzzies.

This is why I love the people of Seattle. This is why Seattle’s music community rules. The story of how they saved our show still makes me get a little teary when I talk about it.

With a new locale in place, all our friends rallied and helped us get the word out about the change of venue and the show went on! THANK YOU THANK YOU!!! Tullycraft soundcheck – before we hung all the holiday lights and tinsel everywhere {Photo: Kelly}

The night was big fun. Your Favorite Book surprised me with a Bright Eyes cover. Tullycraft filled our hearts with love and their set with some songs from their vault. Jon Rauhouse and Rachel Flotard (and their band of greats) made everyone swoon and celebrate with a rousing rendition of “Feliz Navidad” (and Ben Hooker joined them on stage!). Rachel Flotard cajoled fellow Visqueen-er Ben Hooker up on stage with her for a rousing rendition of “Feliz Navidad.” {Photo: Ariel}

The night wrapped up a rollercoaster week with a wonderful holiday bow – the news that we raised a handsome sum to donate to Treehouse For Kids.

Imaginary Dana, my fellow TIG-co-founder, had her first child a couple weeks later. I ended up marrying that guy from Tullycraft. One of Laura Duffy’s photos of Santa ended up in a fairly-viral Princess Superstar video {you gotta watch it!}. I’ll probably re-tell this story again 10 years from now.

Some of the things I mention above are explained in further detail around the web, if you’re interested {links below}. But, what I’m really trying to say is:

Still with me and want to see/know more? Me, too!

A Flickr album of all of Laura {Musselman} Duffy’s amazing photos of everyone with Santa that night: 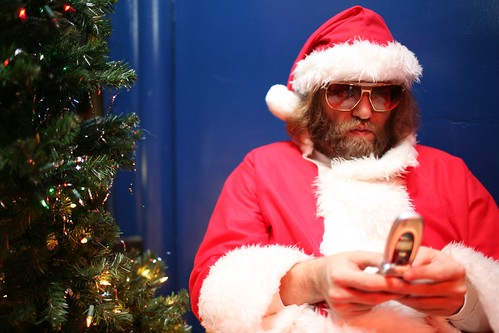 Details about the show itself:

Here’s how that Crocodile thing went down in imaginary blogland:

All this reminiscing makes me want to have another imaginary party real soon. How about you? Maybe we should try for that in 2018. Deal?

Top photo: That’s me hanging the signs on the windows of an empty Crocodile on the night of the show. I look sad. I’m actually super grateful to everyone involved and excited for the night.

The Shape of Water
Liz’s favorites of 2017: albums and shows that were great even though everything else felt crappy