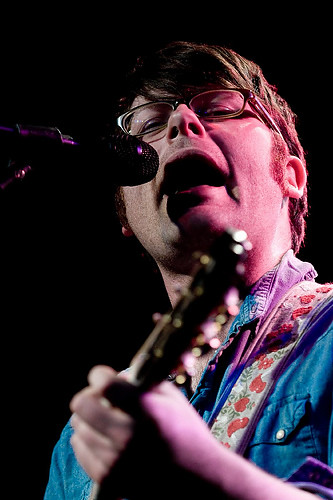 Most TIG readers realize that Colin Meloy knows his way with a fetching narrative whether in song (on oodles of albums by his band The Decemberists among others, including under his own name) or in memoir (his superb 33 1/3 book on The Replacements’ Let It Be, which has been unfairly lost in the shuffle over time). And now those fans who either dip into children’s literature for its affection for good, straightforward storytelling, or wish to get their own kids or others’ kids hooked on the book, can get them Meloy’s own debut in the field, as part of his new Wildwood series.

A “tale of adventure, magic, and danger,” Wildwood is a trilogy in collaboration with fawned-over illustrator Carson Ellis. HarperCollins won the rights to the series after five other publishing houses competed in the auction for the rights. The first novel should be in stores in autumn of 2010.

Meloy has been making music with The Decemberists since 2000, and their most recent album hit #1 at the iTunes Store album chart the day of its release there, and made #14 on the Billboard chart. Carson Ellis is notable to The Decemberists’ fans as the guy who crafted the visual aesthetics for the band, from logos to cover art to looks, and took his talents outward to help Lemony Snicket on his heralded Young Adult book The Composer is Dead.

From the HC PR about Meloy’s and Ellis’ dive into new literary terrain, and their passion for doing so:

“The germ of this series goes back a long way,” Meloy said. “For me, this is the culmination of a long-term collaboration with Carson, matching words and art.  I grew up on a steady diet of Lloyd Alexander, Roald Dahl, and Tolkien; this is our humble paean to that grand tradition of epic adventure stories.”Ellis commented, “Wildwood is a project very close to my heart – the collaboration that Colin and I have been dreaming about for years.”

My wife is a big fan of YA lit and The Decemberists, so I know what she’ll be inviting to our beloved bookshelves this fall.

{Photo by Chona Kasinger in the TIG Flickr Pool.}