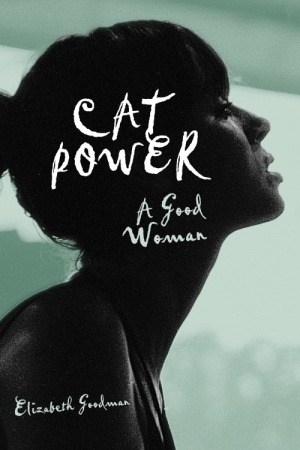 Elizabeth Goodman, a former editor at the missed rock magazine Blender, has written a very compelling biography of Chan Marshall, the artist we collectively know as Cat Power.

The book’s full title is: Cat Power: A Good Woman, How Chan Marshall, aka Cat Power, Survived Herself – and Became the Indie Rock Queen. It was actually published in April but I just found out about it about three weeks ago when I saw it on a shelf at Barnes and Noble. Goodman begins her book by detailing the lengths that Marshall had gone through to stop the book from being written. She had gotten vaguely-worded letters from Marshall’s attorneys and Marshall’s acquaintances were told not to speak with Goodman. That was unusual because Marshall has generally been really forthcoming in interviews she’s given and Goodman was a fan (so am I) and wanted to write a flattering portrait of the artist. Goodman became enchanted with Marshall when she interviewed her for Spin in 2005 and found her charming and forthcoming. She said in the introduction to A Good Woman, “it felt as if we were at a slumber party and had stayed up all night watching Christian Slater movies and eating Lucky Charms and sour straws.” She continues:

Chan, like Morrissey, Kurt Cobain, and Conor Oberst, comes across as so inclusive that it’s easy to believe that she is actually your friend. No one knows you the way she knows you…. The idea of spending the next year of my life over at Chan’s house made me giddy. I didn’t seriously consider that this woman, who documented her most private thoughts on record for public consumption, who told every journalist with a pen and paper – credentialed or not – about her deranged parents and her wild Southern-gothic childhood, would have a problem with me picking up the narrative where she left off. After all, I was a fan.

Fortunately, Goodman writes this book as a journalist looking for a story, not as a fan or publicist. Although Marshall tried to stop a lot of people close to her from talking to Goodman, she finds many still willing to, including former lovers like Bill Callahan and people from her label, Matador.

Goodman meticulously documents her upbringing, like how her father was a failed musician and discouraging, and ultimately jealous of his daughter’s success and her rise to being one of the most notable acts in indie rock. I remember when Marshall canceled her tour after her most recent proper album, 2007’s The Greatest, was released and was confused by the vague statement from Matador that no details would be forthcoming “out of respect for Chan’s privacy.” Goodman gets remarkably close details to what exactly happened that caused that tour to get canceled.

As a fan of Marshall’s for quite some time, it was obvious that she was battling several mental health issues, as well as drinking heavily. Her shows have notoriously been spotty, but the issue always seemed to go deeper than stagefright. She does have a lot of goodwill built up and no one really wants to see her fail (even people who went to her shows with the hope of witnessing a trainwreck in progress), which is partially what makes Goodman’s book such a great read. The portrait Goodman paints of Marshall (strangely, a dog lover) is a complex figure battling her own demons while not finding the healthiest means for dealing with her fame. It’s not a hatchet job, nor is it a fawning biography; both of which Goodman would be more than justified in writing.

My favorite Cat Power albums are the most recent, original albums, You Are Free and The Greatest, because the songs seem to be the most complete and fleshed out, even if the lyrics were much less confessional. She does have one of the most gorgeous and seductive voices in music. After reading the account Goodman’s told about Marshall’s life, I’ve really had a hard time going back and listening to the most revealing Cat Power albums since I finished reading A Good Woman two weeks ago. I don’t believe there was anything that was untrue about the image of Marshall’s life that she set forth, but Goodman fills in a lot of blanks and leaves a lot fewer question marks.

{Cat Power plays at Marymoor Park on Thursday, August 27 with The Pretenders and Juliette and the Licks.}