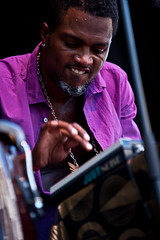 This year may have been my favorite year ever for the Capitol Hill Block Party. With an up-to-date, enthusiastic focus on exciting developments in local hip-hop and rock, 2010 stands out as a year in which so many hot regional bands amped crowds and few out-of-region big name performers were as required. The presence of sponsors and participants like KEXP and The Stranger staff and other local writers among all the fans made it a San Diego Comic Con for local music culture.

From show to show you could hear people playing music, talking music, sharing music, and loving music. If you were able to make it to the Capitol Hill Block Party this year, what are your favorite bands performing you’ve seen so far? Here are mine:

There have been criticisms and speculations that Shabazz Palaces’ set was hampered by some struggling sound problems and that it should have been in a less airy, open environment. Due to the music being connected to metanoid images of relational decay and underground struggle, some reported they would have preferred the performance held at Neumos down the block instead of the main stage. I agree in theory, but performance just isn’t about sound, it’s about vibe. SP actually sound like they have a staggering root in hardcore communal scenes like DC’s Go-Go and syncopated, anthemic groups such as King Sunny Ade and other Juju performers. Because they are as prophetically prayed for and prized as a band like The Clash in the early punk days, people have extremely high expectations. As for the sound, well, it was the first humungous show of the BP, and festivals always have early kinks to work out, so all eyes and ears were wide open to catch any flaw. The problem is, for their second show, Ishmael and his collective created music that was extremely hard for most bands at the CHBP to follow. Sour grapes, anyone? Props to the scheduling people for being so assertive and kicking things off atomically with SP.

Got to hear a few songs from Troy Nelson’s crackling new band (with co-singer Mackenzie Mercer), far less comedic than Black Daisy, but still existentially hilarious at times (“Get Over It”). Nelson knows how to knead love from the shoulders of a crowd as his songs make them whimper with delight identifying with the heartbreak described. The Cha Cha was plugged full though which made me hasten to get to Shabazz, but I can’t wait to see the Young Evils next live set.

Champagne Champagne put on a performance that amped old heads and intrigued new fans. This live performance shape-shifter and game-changer was essential for Seattle music fans this weekend. As if inspired by the hotly talented new competition coming up nearby in hip-hop, DJ Mark Gadjadhar’s atmosphere was more visceral this evening  than I remember in previous Champagne Champagne performances being. The lack of dub-space I’m used to hearing and floating through was replaced by a charged energy that is introducing a new chapter for Pearl Dragon and Sir Thomas Gray. I think their next recording will probably slay me, if the new stuff I heard was any indication.

Seattle punk funk’s Shannon Funchess (IMIJ) added a sweet swirl of soul to this wartime-disco manifesto, with superb guitar tones sparkling in and around popping funk, and the deeply yoga-trained Nic Offer the ripped Rollins of rave and roll. The KEXP Secret Show room (right next to the new Via Tribunali alongside Cafe Vita) was stuffed more than ever before, and Offer leapt from high-placed coffee bean bags to smaller piles, grinding with the adoring audience for an immaculate EPs worth of tease for the night’s big main stage show. Unforgettable, and now I need to actually get their records to hear what Offer is being so confidently passionate about when he yells (awesomely).

I missed them at the Champagne Champagne set where they came on as guests (which people were very excited about), and could barely see them from where I was in the balcony at Neumos for this full set, but Stasia and Cat Satisfaction made some of the very best music I heard all weekend. I had never seen them live before, and was wondering from what I heard if they had enough gas for a full show, but they dominated and made everyone jump up and down forever in the crowd above and below. I’m a huge fan now, which I always wanted to be, and will buy every mix-tape and full song release they have planned for us. I have no one to compare these two gals to; they’re uniquely creative, as rap as they are on-the-one cyberfunk, new wave as they are soulful. Makes you wish everything they’ll be putting out could all be on twelve inch singles with multiple mixes of every jam.

Happy Birthday is fronted by Kyle Thomas, who spits strung out huffed poetry and strings out licks like a one man Cheap Trick by way of a much less frantic Red Kross, and I would have bet that live the weirdness of “Subliminal Message” or “Girls FM” wouldn’t be as sumptuous as their album I crank on weekend afternoons. But there it was, up there on the Neumos stage, even better live, with Ruth Garbus’s immaculate drumming keeping the weed-wine dream alive. A terrific trio making raunchy rhapsodies look effortless.

Coming on later than scheduled, but I was pretty toasted by then so don’t know exactly when. Anyways, you can’t miss Blitzen Trapper, a band that even when quiet sends out a cloud of bliss to an exhausted festival crowd. Their song content can be grim or grandiose, sweeping cosmically or seemingly tragically personal, but the Young-Petty feel is pleasuring mighty real. This was also one of the rare times I’ve ever come into a show late and then heard a half dozen songs that are absolute favorites, right in a row, as if I was awarded for finally showing up.

Speaking of which, I better get ready to head off for day three of the monumental, absolutely wonderful CHBP 2010!

{photo by Jason Tang from the TIG Flickr Photo Pool}