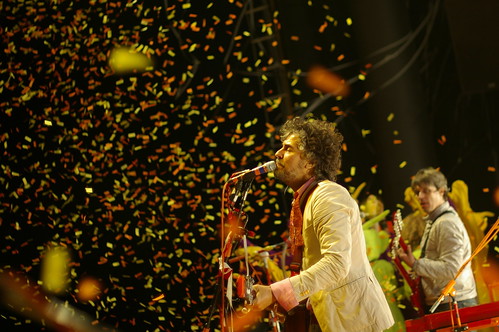 I would be really really upset if I lived my whole fabulous life and never took the opportunity to see The Flaming Lips. From those early psychadelic garage-rock days to the immaculately produced and executed work of the last few years, they are a constant wonderment to me. Not only are their albums some of the most noted in indie rock, but the down-to-earthness of their personalities (as seen through the phenomeal docu-realness Fearless Freaks) and their continued sonic genius make them hard to put down.

A perfect venue for a near-perfect band, I’m positive that Marymoor Park will help put The Lips’ best foot forward on Friday night (August 21st). I’m excited to experience their antics, be they Hatorade for the Arcade Fire or the NEW King of Pop outfitted in a fetching dolphin suit, I’ll be there to soak it all up.

The band are touring in support of their 12th studio album, Embryonic, but expect to see old gems and new favorites alike. Tickets are a bit pricey at almost $40, but I’ll personally refund your money if you don’t have a blast. And with that ticket you ALSO receive six free Lips’ songs and a free bootleg recording of that night’s show.