By ChrisB on December 13, 2008 in Amanda Palmer, Dresden Dolls, Live Show Review, Showbox at the Market, The Builders and the Butchers

The Builders and the Butchers, on the surface, seemed like an unusual band to tour with Amanda Palmer (the theatrical frontwoman from The Dresden Dolls who is currently touring to support a solo record). Palmer’s set began with her own funeral (did I mention that her album is called Who Killed Amanda Palmer?) but when Portland’s The Builders and the Butchers walked on stage Thursday night at the Showbox at the Market, they looked like five unassuming guys who play in a country/rock band.

Similar to my friend and TIG colleague Deborah Barnard, who was intrigued to cover a prior show because The Builders and the Butchers were endorsed by Palmer (and went home impressed), I was interested in seeing a band up close that has both opened for Palmer and The Decemberists. While not completely dissimilar, their fan-bases don’t intersect too much. When I saw The Builders and the Butchers earlier in the year opening for The Decemberists at the Moore Theater, I enjoyed their set (although my date did not – probably because they weren’t Decemberists) but was too far up in the balcony to see what was going on. Before I could reach a verdict, I needed to see them closer (and not be biased by the fast judgment of a woman I wanted to impress).

The band began their set at 9:10 with their song “Devil Town” and the big, passionate crowd of Palmer fans took to the band immediately. I’ve been to many a show where the opening band where the crowd was indifferent at best, but Palmer’s fans were attentive and sang and danced along for most of the set. (It probably wasn’t without reason that I had gotten to the show a few moments into opener Zoe Keating’s set and went to the very back of the Showbox to send a text message to a friend [and hopeful plus one] and still felt like asshole because everyone’s attention was rapt to the performer on stage.) Ryan Sollee commented that Amanda Palmer has the best fans in the world and I’m sure that is what he was referring to. When he asked who would be going to the show the following night in Portland a few hands went up and but, he surmised, that everyone there wanted to go (I certainly did).

Their set was about 35 minutes long (and in the context of Palmer’s going for well over two hours, felt way too short). They continued the dark theme throughout the set – even blending a new song (which Sollee said they played for the first time at Neumo’s for their show with Hey Marseilles) that I think was called “Black Elevator” – or at least that’s what’s in the chorus – with “Black Dresses”. The latter is probably my favorite song in their catalogue. With its call-and-response chorus that could be sung by a choir, it sounds like it could be sung in a southern revival tent as much as it could be in a rock club.

At the end of the set, they finished with “When it Rains” and passed out tambourines and other noisemakers to the crowd – and eventually the bass drum. The crowd was filling up the room with noise with glorious noise. While the crowd was full of Amanda Palmer’s fans, many knew the words to this song and sang along with it. I have enough a synth pop and electronica on my iPod that the term “real music” has been rendered virtually meaningless to me but that’s just what it was.

Palmer, to discuss briefly, had a much more elaborate set that began with her funeral (narrated by author Neil Gaiman, on tape) and had a bunch of diversions like auctioning off a guitar featured in her “Guitar Hero” video (for $1300 – who in the hell spends that kind of money to a rock show!?!) and a segment called “Ask Amanda”. It felt like a gothic variety show. She even gave out her cell phone number to ask us to text her our e-mail addresses to communicate with her fans directly and around her record label. Yes, I wrote it down and no, I won’t give it to you. She played many songs from her solo album as well as some Dresden Dolls favorites liek "Coin Operated Boy" and "Bad Habit". It was in many ways spectacular – even when I was growing tired by 12:30 (cellist Zoe Keating kicked off the night when she began her set at 8:30). I thought she made genuine eye contact with me when she and the Danger Ensemble (a group of four Australian actors and artists who were part of her act) lip-synched to Rihanna’s “Umbrella”. ‘Ella, ella. Eh eh eh.

Lacking any metaphor or pretension, The Builders and the Butchers joined Palmer and friend/guest musician Jason Webley for a cover of Bon Jovi’s “Livin’ on a Prayer.” 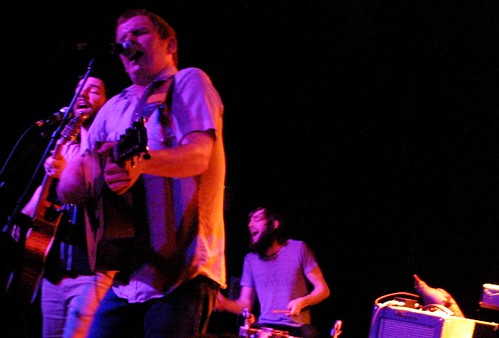 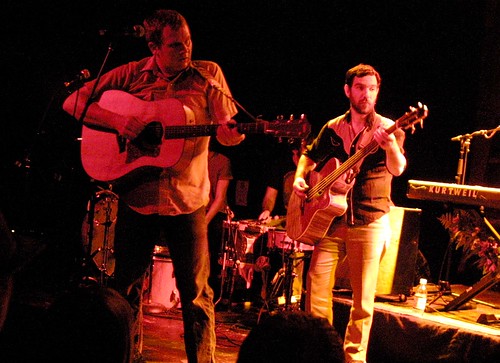 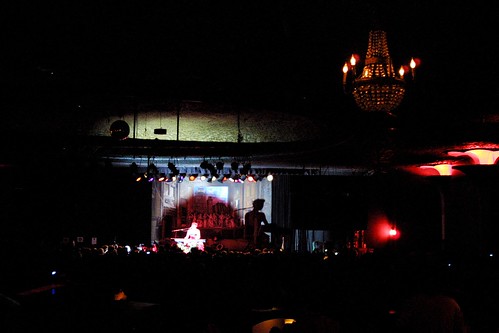 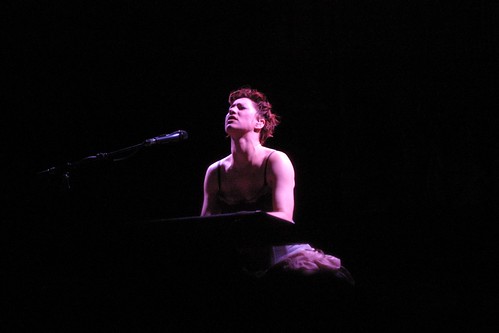