By heather hydra on February 14, 2011 in Imaginary Scoop, Paramount Theatre, The Decemberists 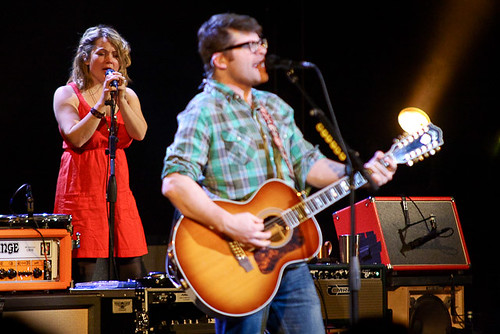 This is why we fight… okay, not really.

Until recently, I had only heard snippets of the new Decemberists album, The King Is Dead. A preliminary chat with the internet tells me that (a) this album is waaaay better than Hazards of Love, (b) REM’s Peter Buck makes a guest appearance on a track, and (c) the entire record has a REM “feel” to it. That said, I’ve listened to a few songs off of the album and can say that it feels like a throwback to Colin Meloy’s Tarkio days, which pleases me greatly.

Simply put: I love this band. I first saw them in 2004 at the Crocodile Cafe with the Long Winters in a double header, two-night extravaganza. They played “The Tain” in its entirety (possibly a bit longer than the original) and it was so, so amazing. Cut to 2010, and the Decemberists are performing at the Paramount Theate — a great example of local band done good, deserving of all their hard-earned success.

Opening the show is Mountain Man, amazing ladies that have a beautiful, ethereal sound. Plan to be there and settled by 8pm, as the Paramount is notorious for starting on time — and these openers are not to be missed!

View all posts by heather hydra →