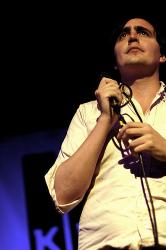 Did that headline get your attention? I like my writing like I like my frontmen: sparkly, flashy, and bit over-the-top at times. So of course, I'm simply mad for Art Brut.

Sadly, no members of Art Brut actually got anywhere near naked during their two Bumbershoot appearances on Sunday. I did, however, see the band play twice: once at a "secret location" KEXP appearance, and then again outdoors at the Sound Transit stage, in front of loads of fans. Since ChrisB already wrote about the band's main show, I'm going to focus on the amazing KEXP performance, as I never thought I'd get to see such a larger-than-life band in such an intimate location.

Art Brut has caused a bit of stink press this Bumbershoot, with the Stranger's Line Out completely taking the piss out of them for being too "meta" and "droll" or some such criticism. To which I say: Either you're pro-showoff dynamic frontmen or you're not, and I firmly stand in the HELLS YEA category when it comes to performers who clearly relish a mic in hand.

In a world filled with self-effacing more-talented-than-thou indie rockers, I heartily applaud Art Brut frontman Eddie Argos for his antics, his irony, his wit, his ridiculous bravado, his gusto, and his chutzpah. Also, his band kicks all kinds of ass too. It's not just any band I'd see twice within four hours.

The band played nine songs during their 30 or so minute set, and while the songs themselves were often hilarious, the banter between (and often during) the songs made the set a complete riot; all my notes from the set are quips from Argos.

At one point mid-set, Argos proclaimed, "I can't keep saying these are about ex-girlfriends, that would get repetitive — even though they are," before launching into crowd pleaser "Emily Kane." I've always had a special warm fuzzy place in my heart for self-deprecating Brits, and Argos fits the role to a proverbial tee.

He advised us, his audience, to stop listening to his band for advice, and then by the next song reversed his stance, saying "I've changed my mind — pay attention to this next song, take advice from rockstars!" with a mischivious grin. Sometime midway through this change of heart, the band effortlessly melded the end of "Emily Kane" into a Smiths' tribute, with the ending chorus of "There is a light and it never goes out" finishing off his goofy pop masterpiece tribute to unrequited, undimished childhood love.

He also went on a mid-song impassioned rant about his local record store selling DVDs and video games ("I hate video games, and I only want to see DVDs of live shows or videos. I want records in my record stores!"). You know it's not going to bring peace to Israel and Palestine (another one of the bands' loftier crusades), but damnit, you've gotta feel for the guy's outrage, no matter how misguided or perhaps contrived it may be.

I also loved at the conclusion of "My Little Brother," Argos augmented the bombastic "Stay! Off! The Crack!" ending with "Stay away from Amy Winehouse!"

And my favorite moment: before the finale "Brand New Girlfriend," Argos proudly boasted that the song had gone #1 in many countries, though he lamented that none of these were countries with Top of the Pops. He and the drummer (for the necessary flourish) led the boastful countdown:

Of course, this exact schtick was repeated at the evening show, with many different countries (both real and imaginary) listed (including my personal favorite: "It was #1 in… {drumroll}…. Hogwarts!").

The fact that the routine was basically the same (for this and much other banter throughout the set) made me wonder how the rest of the band deals with Eddie as The Perfect Frontman. Do they cringe as they hear his same wisecracks night after night? Or do they take new pleasure each time in watching the crowd get whipped into a bang-bang-rock-and-roll frenzy? Such is the hazard of being in a band with The Perfect Frontman, though I didn't see anyone in the band look anything other than absorbed with the set, completely hamming up all of Argos' antics and playing along, quite literally.

Sure, the repetitive might have made me doubt the credibility not only of their claims to multinational #1 status, but also to their sincerity as a band. But actually, it didn't. The fact that Argos and company can pull off the same banter show after show with such zealous enthusiasm makes them all the more rock in roll. When they scream for Top of the Pops, what Art Brut really wants is to be number one in your hearts, at least for the duration of their spectacularly fun sets.

And as far as I'm concerned, at this year's Bumbershoot, they were — TWICE!!!