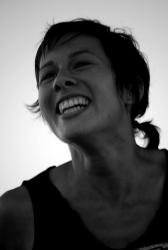 As much as I was looking foward to the Matt & Kim show, there was no reasoning with the traffic and the late dayjob deadline that prevented Dana and I from getting to the Block Party as early as we had planned. Once we arrived, the Party was in full swing with the around stage hosting my beloved M&K full of eager fans.

We ran to the Main Stage 15 minutes into their set and the duo was warmed up and charming the audience with their excited, appreciative banter and catchy songs. Ah, it was nice to be among friends — a sweaty mass of enthusiastic friends baking in the late afternoon sun grinning with M&K glee.

They played most songs from their album (I can't attest to the completeness of featuring all the songs from their catalog since we missed a couple songs in the beginning), but my favorite bases were covered ("Yea Yeah," "5K," "Light Speed").

But, for me, what was most exciting is when they debuted a couple new songs.

Matt's super-giddy state and the buzz of the speakers made it hard to hear what Matt said the title was, but I did hear him say that one of them was about Harry Potter. Whether that is true or not, the crowd loved it. Harry Potter and indie rockers are a natural match after all.

That's how Matt & Kim roll: they can win over any audience of stoic indie rockers with their infectious congeniality and good will. Throughout the show Matt talked about how thankful he was to have everyone there and even pointed to a guy in the front row and complemented him on his rad white-framed sunglasses.

The show ended with the pair standing tall on their chairs, thanking the audience and proclaiming "this breeze feels amazing on my shirtless back" and encouraging us all to make this the craziest summer of our lives. After a way-too-short half hour of dancing to their lo-fi, infectious songs and watching them enthusiastically gush with glee (at each other and to the audience) I was convinced that was a grand idea.