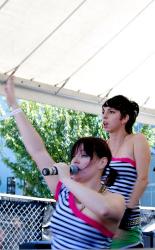 Hip-hop and rap had a definite presence at this year's Capitol Hill Block Party. Among others, there was Dyme Def with their harder, "street" style rhythms and Blue Scholars with their politically minded rhymes. But none were as unique as Team Gina, the prideful lesbian duo who's lyrics are in competition with their synchronized outfits and dancing for which is more hilarious.

They kicked off Saturday for the Vera Stage with an opener ode to boobs. "Is it a mac attack/No, a rack attack!" They followed this with an improvised song about the Block Party itself, seemingly penning the rhymes last minute as they used lyric cheat sheets. Their Team Gina theme song contained witty self-proclamations about their lives, being best friends forever, and how they only "pretend" to be rappers. Perhaps the funniest of all was their song about lesbians, in which they woefully observe, "Are there only 12 lesbians in the entire world?" Apparently finding a girl who isn't one of your ex's exes or a huge slut is harder for the ladies than for straight men.

Rapping in character, they covered a topic very true: how easy it is for the demographic of over privileged middle America boys to get away from trouble just because their "mom is the head of the PTA" and "dad is a successful attorney."

But Team Gina's lyricism wouldn't be so entertaining without the stage routine they have down to a T. They pulled out synchronized moves like a dance squad, and sometimes they reacted with each other as if performing a skit. At one point I saw top rocking [the footwork that occurs before breakdancing] busted out. With their old school style beats, I don't blame them for pulling a move like that.

With their bona fide fast rhymes and ecstatic dance moves, Team Gina should stop "pretending to be rappers," and brag about being the real thing.