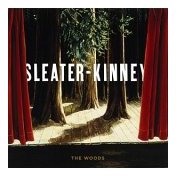 By nature, punk bands get less abrasive as their careers continue. You are likely to often hear songs like "Rock the Casbah" and "Should I Stay or Should I Go" on classic rock radio stations, but very little from the Clash's earlier albums. Iggy Pop long ago realized that you couldn't writhe around in broken glass on stage forever. Now he can be seen in movies sitting across from Tom Waits drinking coffee and smoking cigarettes. The Sex Pistols were anti-establishment when they said "fuck" on national television, but Johnny Rotten has since been a contestant on reality TV shows. And the Ramones were bubblegum from the get-go.

But Sleater-Kinney have never been typical. The Woods is their seventh LP to date, and it is the heaviest and loudest. By far. If the last SK album, One Beat, was an attempt at fighting the Bush agenda, The Woods is living, unhappily, in that reality. It's inaccessible, but by design. "Let's Call It Love" is an eleven-minute song of almost entirely fuzzy guitars (there are no vocals in the second half). It is the kind of masturbatory excess that rock bands use on stage to wind down their sets without actually playing another full song. Is it necessary? Is no such thing as a necessary eleven-minute song? Songs like "The Fox" and "Entertainment" fare much better. The former could be read as a nursery rhyme lyrically ("On the day the duck was born, the fox was watching all alone," sings to open the LP), but the noisy feedback and SK singer Corin TuckerCarrie Brownstein's guitar are sure to give small kids nightmares for weeks.

Much of the vitriol is not directed at Bush, as One Beat was. Instead, it's curiously directed at pop culture for its inaction. Brownstein sings on the first single, "Entertain," "You come around sounding all 1972 / you did nothing new / where's the 'Fuck you!' / where's the black and blue." I'm not sure I agree; however vapid P. Diddy's "Vote or Die" campaign may have been, Green Day's "American Idiot" ("Maybe I'm the faggot America; I'm not part of a redneck agenda") and Eminem's "Mosh" ("This monster / this coward that we have empowered / this is bin Laden / look at his head noddin' / how could we allow something like this / without pumping our fists?") still got the message out to people in red states. It may not impress Punk Planet readers, but those two acts registered a lot of voters for John Kerry. Having said that, "Entertain" is still a kick-ass rock song — heavy on reverb and feedback and driven by Janet Weiss' tight drumbeat. You can even download it from Sub Pop's web page.

There are few bands that have guitarists as intense as Brownstein, or drummers that hit as hard as Weiss, and none that have singers with voices as strong as Tucker's; but the genius of SK has always been that they are more than the sum of their parts. With the exception of Weiss's Quasi (which is not a side project, but a second full-time band), all other SK side-projects have failed to match the longevity because they cannot match this dynamic.

Republican politics have made for a strange — yet effective — muse. Watergate begat punk, there was Rock against Reagan and Chuck D and Flavor Flav made up hip hop's best act when they lobbed lyrical grenades against King George I in the late '80s. And we imaginary ones like to look for silver linings wherever we can find them these days.