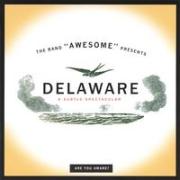 Delaware, the remarkable debut album by Seattle septet "Awesome", starts and ends with a question: "Where did you go when we needed you most?" That recurring unanswered plea casts an air of wistful longing that hangs gracefully throughout this often goofy, charming record. On their twisted journey after what's missing, "Awesome" fills voids we never knew we had with waffles, untrue Delaware "facts," and an overflowing helping of odd instruments that whimsically inhabit their legitimately poignant songs. An ambitious comedic/melancholy concept soundtrack, Delaware plays like one of those old Peter and the Wolf -style kids' records done by a skilled, experimental indie-pop band. It's comfortingly folky in places, jarringly weird in others, and always distinctly dramatic.

An appropriate debut for a band that began as a thrown-together cabaret act by a bunch of actors. "Awesome" at first appeared little more than a new way for these experienced performers to get some laughs, but when their shows became a sensation in the fringe theater scene, outselling the plays whose stages they borrowed, the band took over as a primary gig. Core members John Osebold (guitar/vocals), John Ackerman (mandolin/ukulele/melodica/vocals), Evan Mosher (trumpet/vocals), David Nixon (banjo/vocals), Basil Harris (bass/vocals), Kirk Anderson (drums), and Rob Witmer (accordion/various percussion and wind instruments) spent the next year working on scattered gigs and projects that incorporated elements of comedy, spoken word, and literature into their work whilst also building up their repretoire of original songs and honing their chemistry as a band. They reached outside the theater community to collaborate with the likes of Reggie Watts, Sean Nelson, and author Jonathan Safran Foer, yet "Awesome" retains a commitment to a uniquely presentational performance aesthetic: Instruments are also props, band members always wear suits, the signature quotation marks affixed to the junior-size drum kit keep two eyebrows arched at the audience.

From this fertile creative ground grew Delaware, at first a show and now an album. The multi-media stage production augmented the band with a series of delightfully inscrutable vignettes about birds, berries, and at least one of life's big questions: "When it rains in the middle of the ocean, is it really raining at all?" (Spoiler alert! No.) While a childish smirk a la They Might Be Giants does permeate much of the album, "Awesome" is no joke. They punch up their proud theater-geekdom with undeniable chops. Not only is their singing-performed by different combinations of vocalists depending on the song-uniformly decent, with scores of layered harmonies, but the banjo is not an easy instrument to play. Neither is accordion, trumpet, or um, typewriter, all of which are featured prominently on Delaware. And that's just the beginning. The ubiquity of bizarre sonic elements (kazoos, whistles, kitchen utensils of every kind) can admittedly cause a bit of ear fatigue after awhile, but their presence is rarely overwhelming, and the songs always win out. The quality of the songs, after all, is what makes this whole thing work.

Principal songwriter Osebold specializes in dynamic compositions that juxtapose playfulness with rueful yearning, both lyrically and musically. The lovely "Del" creates a portrait of a "sad and lonely girl" whose "plans would all unfurl / into a wish / on the crescent moon curl." It's a regret-tinged elegy that explodes suddenly into a declamatory doo-wop for a few seconds, before shrinking back to where it started, finally fading out on a mournful, muted trumpet solo. Similarly, "Zeno's Rock" awakens from a dormant, wishful dream-state into an eruption of drums, ooh-aah backing vocals, and defeated ambition ("My life will not be long enough $#151; I'm always halfway there"). The aforementioned "When it Rains in the Middle of the Ocean" and the irresistible "Are You Aware" are the tracks most likely to get stuck on repeat in your head. The latter rides on a fast and funky guitar-bass-ukulele riff, then bursts into a chorus with an ascending four-part vocal harmony that conjures images of each band member removing his straw hat with a bow and a flourish as he chimes in. "Come along and sing with me hip-hip-hooray!" they all shout in unison. How could we not? It's about the most fun, irony-free three minutes of music you'll hear all year.

Given its theatrical origins, Delaware's few this-made-more-sense-on-stage moments can be forgiven (the out-of-place "American Boyfriend," for example). The star of this show is certainly the abundance of beguiling music that fills this record. Delaware may not sell you on the merits of the First State, but it certainly makes a strong case for the talents of "Awesome."