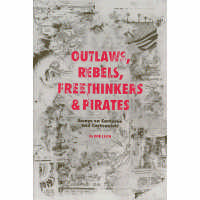 Bob Levin interviews artists, "…driven by the Hounds of Hell" (back cover hype), but he seems like a supernaturally feral mongrel himself, his journalistic jaws clenching upon the ideas and personalities of visual gutter poets, art world shimmy-shysters, homeless zine culture shamans, Dostoyevskian derelicts with a pen in one hand and their minds oozing into the other, in this exquisite collection of those picaresque conversations.

Berkeley-based lawyer (specialty: workers' comp) and novelist Levin's previous non-fiction book, "The Pirates And The Mouse," chronicled the nefarious struggle between a group of underground comic satirists and the iniquitous Empire of Walt; portions were dry, but it painstakingly revealed the reality of the forces in the battle for intellectual freedom (hence the subtitle "Disney's War Against the Counter-Culture"), inducing the kind of cultural pain that leads to further activism.

If like me you have an inexplicably huge collection of old "The Comics Journals," you might feel literary sense of karma, encountering these articles assigned for that wonderfully tenacious and rascally magazine over the years. I love having a fat, attractive anthology of Levin's personally revealing (author demented by EC comics at an early age), experts-outsourced (many psychological experts tapped for occasionally hilarious analysis), challenging-to-the-graphic demimondes, essays.

However, if you are a "neo" (as we used to say in fandom, long before both Stewart Home and the Wachowski brothers gobbled up that word) just recently getting into such works as "Ghost World" or "Blankets" or "American Splendor" and want to experience the backgrounds of artists a little more visceral, this is a splendid guidebook to the darker off-curbs of the illustrative imagination. But there are surprises all along the way, even for those who are familiar with passed along notions of the subjects. The brief brilliance and sad demise of sordid, dog-loving, self-deprecative, trash-punk Dori Seda is tenderly examined (a collaboration with Bob's wife Adele, who journeys with him muchly through various profiles, countering his arguments like only a lawyer's wife probably can).

Yet Canadian critical favorite Chester Brown ("Yummy Fur") is grilled to exasperation, and encouraged to expand his horizons past simple autobiographical comics, due to the mystical brilliance of his adaption of the "Gospel of Mark" and his schizoid "Ed" — advice Brown ended up taking, crafting his audacious, creatively inspired historical epic "Louis Reil" perhaps in response.

Levin twists the fanboys' apples by defending the out-of-the-cupboard antics of Lichtenstein and other Pop Art "poseurs" instead of joining in the predictable communal lamentations of how the original pulp artists were treated. (His description of the importance of Marcel Duchamp is Necessary Reading for anyone who thinks they understand the value of modern art and hasn't anything nice to say about it — especially middle-brow comics fans who fail to see how the rich play of Dadaists can be considered as fun and important as their own favored medium.)

Goring sacred cows and stomping all over toes, Levin criticizes Harvey ("American Splendor") Pekar's award-winning autobiographical graphic novel about battling cancer, "Our Cancer Year," by accusing it of artlessness in, "sticking to the facts." (My increasing boredom with the oeuvre of Pekar's work found companionship in this assessment.) That's right: Sure you suffered, Harvey, but your reporting from Hell left a little to be desired. In my neighborhood, we would say that Levin is unafraid to bust balls.

I have some minor complaints with this otherwise mind-expanding tome — I'd wished Levin had studied "Zap" artist S. Clay Wilson's work a little more before interviewing him (he'd only read one story by the time they'd met), and I wanted to find out more about the squeamish sexual paradoxes of vagrant cartoonist B. N. Duncan, as they dominate (pun intended) his work but aren't really explored.

At the end of Philip K. Dick's posthumously published "Radio Free Albemuth" the main character, a fictional representation of Dick himself, is at a construction site, listening to his own radical ideas being played out over the ghetto blaster of some youths nearby. Reading "Outlaws, Rebels, Freethinkers, & Pirates," one can imagine many of the artists interviewed here feeling the same way, their revolutionary ideas spreading into not only mainstream art but films, politics, and various milieus more visible. It should give them the hope and encouragement that Dick feels at the end of that novel, and that Levin gave them by taking their ideas seriously enough to write about.