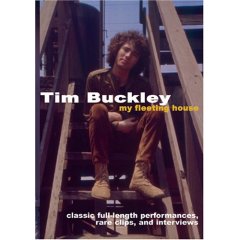 As people continue to be drawn into the Jeff Buckley cult, it’s tragic to watch his also mysteriously doomed father’s troika of a career — from spiritual protest singer to sensual cosmic bluesman to down and dirty funk junkie — sort of stagnate in its historical trajectory.

Yet if you have ever set the Elizabeth Frazer/This Mortal Coil cover of Tim’s “Song to the Siren” to endless repeat on your CD player, you might wonder where the magic of that immortal tune came from. Tim was as much a political contrarian as the Last Poets and a musical one as Captain Beefheart, though his work only got coarse and vulgar in the last period of his experimentations. Unfortunately, that is my favorite period, and I wish the interviews with his co-writer Larry Beckett, guitarist Lee Underwood, and biographer David Browne (“Dream Brother”) had dwelt a little more on the saucy, nasty soul of those albums (buy ‘Greetings from LA’ for some seriously wicked R&B raunch, kids).

This documentary is gently revealing, and I think fans who are already into Tim Buckley are more prone to enjoy it, but one can’t help but think that these sweet, never-seen-before TV performances won’t draw a whole new generation of fans in. Maybe even some people who have worn out their copies of “Grace.”