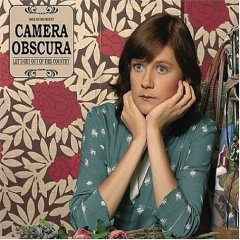 Let's Get Out of This Country

Let's play a fun role-playing game. Everyone loves role-playing games, right? Of course you do, 5th level dwarf. Ok, let's pretend that you're a fairly long-lived indie rock band, and by that I mean you've probably recorded 3-4 albums and have been on a couple labels. You've slogged out on tours of Podunk towns across the country in the back of a 1976 Ford E-350 Van that you're relatively confident have put a little too much CO into your bloodstream (either that or it's the constant Galaxie 500 your bassist insists on playing when she is driving). You've between zero and no dollars so far, but hey, that's rock Ôn roll, or at least indie rock Ôn roll. So, Mr. or Ms. Indie Rock Band, when do you know you've "made it"? Is it when do you go from being filed from Mo-Mu to having your own placard at the local record shoppe? Is it when you can go into your local coffee shop, name drop your name and have the hipsters say "oh yeah, I'm into them, but only their early stuff." Is it when you become the punchline (in a good way) of a hip, indie comic strip? It's hard to tell, but for Camera Obscura, they may have stepped into the first level of the indie rock pantheon with their new disc Let's Get Out of the Country, an album chock full o' harmonies, sweet pop numbers and feel-goodness.

There are a few things you have to enjoy if you're to enjoy the Scottish sounds of Camera Obscura: (1) 1960's pop rock; (2) lush melodies; and (3) vocals that sound like they were recorded in the next room. They fall into the Belle & Sebastian school of indie pop, with a touch of Mazzy Star and the aforementioned Galaxie 500, but with a little more kick. Camera Obscura took their own advice when they recorded Let's Get Out of the Country by heading to Sweden to work with Jari Haapalainen (a Finn!) on the follow-up to Underachievers Please Try Harder (possibly my favorite title for an indie album, I mean, doesn't it sound like a Smiths song if Morrissey was Tony Robbins?) What they ended up with is a collection of pleasant, gentle and soothing songs that will make you feel warm all over. In fact, they start off with a little piece of sunshine called "Lloyd, I'm Ready to be Heartbroken!" which, among pleas I've heard, is among the oddest. It's a happy number filled with horns, strings and Tracyanne's sweet vocals, creating a succulent pop song. This 1960's pop sound continues into songs like "Come Back Margaret," a song that could have a long future on Wes Anderson soundtracks. The title track captures that late 90's Belle & Sebastian with a wall of sound that really shows the band flexing its musical muscle.

They do tone down the fun a little with the Hope Sandoval inspired "Dory Previn" that has that sound of echoes and lonely nights, similar to the country ballad styled "False Contender" or the tender ballad "Country Mile". There is the tendency for the songs to seem to blend into each other in a more of a "oh wait, is this a new song?" sort of way. However, "If Looks Could Kill" does not fall into this trap. Instead, its high-octane pacing makes it one of the standouts on Let's Get Out of the Country, it has a finger-snapping beat and dreamy horn solo that makes it about as infectious as anything on an album full of pop gems. It closes out with "Razzle Dazzle Rose", a bit of a Galaxie 500 type song that seems to roll the band softly off into the sunset. The horns swap with Tracyanne's vocals and the whisked drums evoking a hot summer night in a dark coffee shop.

Let's Get Out of the Country is by no means something you've never heard before, instead it is a collection of solid, enjoyable, fun songs that seem to arrive with such ease that you feel like they've been around for years. Maybe that's what you really need from a band these days: the ability to just write good songs. Camera Obscura should have no problem getting into the college radio rotation for a good long while if they keep crafting brilliant little songs like these.