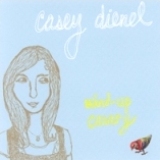 We live in a postmodern world. Nothing exists without the context of the reader and the writer. With that, I feel I must disclose a number of key facts about Casey Dienel and this review before I begin: (1) Casey is from Boston (the home city of your humble author, although I forgive her for recently moving to Brooklyn); (2) I saw Casey live (with Tiger Saw) on New Year's Eve in Somerville, MA and (3) I'm a sucker for female musicians, especially when they talk to me. That being said, I might have a predisposition to like her new album, Wind-Up Canary. Equal parts Rufus Wainwright, Ben Folds, Tom Waits, and Fiona Apple, Casey creates songs that skirt between somber indie-pop and cabaret.

One of the first things you notice about Casey during her shows is that she seems so demure and reserved during her intro that you'd be surprised if you could hear her if she amps went up to 11. Wrong. Wrong. Wrong. Once the talking ends and the singing begins, she suddenly becomes the Slayer, if Buffy was destined to sing and play piano. The audience eats out of her hand, sing-along when requested and responding when queried (nothing will get a Boston crowd going these days like an chance to diss Johnny "Turncoat" Damon), especially with her closing number "The La La Song" that trailed into the snowy New Year's Eve night air like an chorus sending 2005 off to pasture.

Wind-Up Canary captures much of the energy that Casey brings to her live show. Not surprisingly, most of the songs are dominated by her voice and piano and you feel like that's all she really needs. "Doctor Monroe" and "Embroidery" have a strong Rufus Wainwright feel to them, sounding as if we should be hearing the songs in a smoky bar late at night. Take that same bar setting and move it to the old west in the early 1900's and you get "Baby James" that has a Fiona Apple meets Sixteen Horsepower sound. Most of her songs are narrative in the Leonard Cohen/Tom Waits tradition, showing her strength in fashioning excellent lyrics that do more than support the melody. "We'll toast this death of summer months and summer warmth and summer love," she sings in "Cabin Fever" a song about the changing of seasons in New England, "as soon you get used to one season, it moves and that's all you can count on."

In a Ben Folds moment, "Frankie & Annette" tells the a Bonnie & Clyde-set-in-Boston story (starting at Fenway Park no less) that ends when, "They got caught by the cops when they got Columbus/Who is it that put you up to this?/Frankie said it was fate, Annette said it was love." Songs like these seem to go by so quickly as you get wrapped up in Casey's sparkling narrative lyrics. "Stationary" takes us from the smoky bar to the non-smoky coffee shop, replacing Casey's piano with an echoey acoustic guitar. This track is starkly contrasted by "Tundra" that probably has the most complex arrangement on Wind-Up Canary, with horns, strings and piano. This difference demonstrates the range song styles that Casey is able to master, as her voice feels perfectly at home in both settings. She closes the album with the aforementioned "The La La Song," a bittersweet lovesong about the end of the year, "It's funny, I like me best with a broken heart," Casey admits and takes us out with a melancholy chorus of "la la la" (see above).

Wind-Up Canary succeeds in being an album where you feel like the singer is opening herself to you, the listener, as if you are an old friend. Casey Dienel presence, both on the album and live, seems to be something special when even in a roomful of people you don't really know listening to a singer you've never seen before. you feel like she's singing straight to you. That quality is something many artists lack and it's hard to create — you either you have it or you don't. Casey has it in spades.