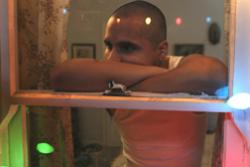 imaginary embracey May 6, 2006 no Comments

"How, in the lunacy of your mind, is hip-hop the music of the oppressor?"

Back in the late mid-90s, long before gaining fame as screenwriter of Million Dollar Baby, Paul Haggis created the wonderfully ahead-of-its-time network TV program EZ Streets, a gritty urban crime drama about a semi-disgraced detective and an ex-con crime boss leading parallel lives on opposite sides of the law. There was never a clear hero and no character was all good or all bad, but the show was 100% brilliant. It never clicked with the general public, though: ratings were horrible, despite its intricate stories and as-yet-unparalleled production values. It was canned after myriad timeslot adjustments, and the real crime is that CBS never aired the tenth and final episode.

I thought a lot about EZ Streets during Crash, an entrancing and intensely powerful tale of racism in contemporary L.A., which Haggis co-wrote and directed. Like a lot of good Los Angeles flicks (Magnolia, Short Cuts, Grand Canyon), it's structured in vignette form — and many of the complex characters in the densely-woven yarn challenge our initial conceptions. Early on, we're introduced to a pair of young black men (Chris "Ludacris" Bridges and Larenz Tate) walking down a suburban street, clowning their posh surroundings and musing about how they are the ones who should be scared of the "overcaffeinated white people" that surround them; moments later, we learn that they're carjackers. In a subsequent vignette, pampered hausfrau Sandra Bullock (finally in a small supporting role, and pretty good, I gotta admit) accuses a tattooed Latino locksmith (Michael Peña) of being a gangbanger; this is followed by a remarkably tender scene in which he proves a model of integrity and fatherly wisdom. Then there's the upright detective (wonderful Don Cheadle) who refers to his partner (Jennifer Esposito) as Mexican when she isn't, makes an incredibly harsh overstatement about ethnicity when she calls him out, then wonders why she's angry at his cultural insensitivity.

My favorite storyline involves the fabulous Thandie Newton, who can do no wrong and who has a standing offer to be the mother of my children. When we first meet her Crash character, she and her successful TV-director husband (Terrence Howard) are being pulled over by a racist cop (Matt Dillon) who proceeds to subject her to a humiliating body search in an atrocious display of power abuse. (It's one of the story's many coincidences that Newton and Dillon meet up again later, in far more perilous circumstances, for one of the most painful and riveting movie scenes I've ever encountered.)

Yes, this is a richly-populated film (Brendan Fraser, Ryan Phillippe, and even a blessedly non-tapdancing Tony Danza are on hand, too), but Haggis pulls of the balancing act with apparent ease, tackling the race issue from almost every conceivable angle and painting an affecting portrait of the rage and stupidity produced by intolerance. Like EZ Streets, it's also about fathers and sons and orders of men, all living harsh lives in a diverse but brutal landscape that never becomes the melting pot it should be.