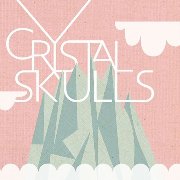 My guy first bought Crystal Skulls' debut record Blocked Numbers several months ago and immediately insisted that it was one of the best albums of the year. I was hesitant to agree he could be right, until one day I loaded it to my iPod and rode the bus with it streaming to my ears through those little white cords. Then I heard what I wasn't expecting: little sonic blips and background noises that filled this record with surprising samples, odd tempo changes, well-crafted sections, and a lot of pop beauty.

Crystal Skulls are a "band's band;" that is, there's tons going on below the surface of their simple pop appeal, the kind of stuff that anyone who's spent a lot of time contemplating arrangements and riffs can deeply appreciate on a craft level. The harmonies and musical constructions on Blocked Numbers are quite intricate. Add their smart lyrics and entrancing rhythms and you've got a complex little gem of an album.

One of Crystal Skulls' tricks is to draw on great music of the past but also add a new spin. Singer/guitarist Christian Wargo, who plays a twangy Rickenbacker, clearly studied what he wanted to lay down on this record. Wargo reportedly aimed for a George Harrison sound on the guitar tracks, and the open, strummy melodies certainly fill that order. Complementing the rootsy string lines are Yuuki Matthews' bass maneuvers: like the late and great John Entwistsle of The Who, he grooves on leads more often than rhythm. Add this to Casey Foubert's skillful drum beats, and Crystal Skulls have a standout rhythm section. Ryan Phillips throws his lead guitar panache onto the record, and Wargo's smooth, mature vocals are just pink icing on the top.

Though Blocked Numbers is their debut, the band has deep Northwest roots. The bandmates have populated various local groups, including Pedro the Lion, Seldom, Danielson Famile, and Dance Imperative out of the Tri-Cities.

It's all enough to make me feel like I've stumbled upon my imaginary big brother's jam band rehearsing in the garage — the one I teased him about mercilessly, thinking they were just goofing off — and then realizing that he and his friends actually are good musicians. Much to the amusement of my dear guy, I now truly enjoy Blocked Numbers, and he never fails to point out that he discovered it first.

I'll give him the "I told you so" moment. Especially since I just voted for Blocked Numbers as one of my Top Northwest Releases of 2005.