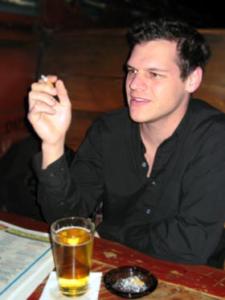 Matt Terich from the Senate Arcade

What’s more rock and roll than Coffee with a Rockstar™? Beer with a Rockstar™! I had the charming opportunity to be uncaffeinated and in the presence of the Senate Arcade’s Matt Terich.

He likes caffeine {hold the egg} but prefers beer.

What’s your favorite caffeinated beverage?
I’m crazy about the americanos. Every now and then, though, I crave girlie drinks, things with sugars and syrups.

Do you have a favorite coffee place?
I have a few. Lux in Belltown, Zeitgeist on the Hill. Torrefazione in Pioneer Square has the best espresso I’ve had in town so far.

How long has the Senate Arcade been together?
A little over a year. We started playing out regularly about 10 months ago.

What’s your favorite Seattle venue to play?
Graceland. It’s got that fun smell. It’s a good size and it’s loud and the people there are always really great to us. They’re sweethearts.

Chop Suey is fun, too, but it has all these OSHA hazards and razor blades in the floor and landmines and shit. If you stay in the back room you’re safe, but once you go out into the front room, you can really get hurt.

Do you have any wacky Christmas traditions?
Nothing terribly wacky. I usually visit my parents for 5 or 6 days and just hang out and do nothing. Last year I watched the entire first season of “24” in two sittings. My brain fell out of my head. I plan on making a tradition out of this inspired laziness.

What’s on your Christmas list this year?
I want a Paul Reed Smith. Buy one for me, please. I like red.

What is fruit cake best used for?
I’m not sure. Though I do remember seeing an episode of PeeWee’s Playhouse where he built an addition onto his house made entirely of fruitcake. I’ve never actually made or eaten or otherwise manhandled fruitcake. It kind of scares me.

Have you ever gotten tipsy on eggnog?
I’ve never actually had eggnog. I’ve always been a little afraid of it. I think the concept of a drink with raw eggs in it is a bit gross. I don’t even know what eggnog tastes like. I think I have an irrational fear of Christmas specialty food and drinks.

Has the Senate Arcade ever toured outside of Washington?
We did a west coast tour over the summer. We played Sacramento, Reno, LA, Orange County… err “The OC”, San Diego, San Luis Obispo. There were some mishaps. I’m sworn to secrecy on some of it. A lot of it was dealing with shitty clubs.

We played this dive in Reno that had blown out its PA the week before. Some dude at the bar actually drove out to his rehearsal space and brought his own PA in for us. The two bands we were supposed to play with cancelled. One just didn’t bother, the other band took the time to drive out from Sacto and then decided it sucked and left. We got really drunk, made $50 and gambled it all.

Todd and Austin almost got in a fight in San Luis Obispo with the booking agent, who stiffed us on our cash. We camped at some weird place in Oregon that had like space aliens and war and axe murderers. There was a mormon BMX team too. It was all pretty surreal. Todd almost got bounced in one of the clubs for asking the doorman where the band room was, saying he needed to take care of some cocaine and hookers before he played. The bouncer didn’t really appreciate the humor.

Is the band working on any new material?
Yeah. We’re finishing up a bunch of songs for our first LP. We have a tendency to keep writing new stuff and taking too long to finish any of it. We have about 12 songs that aren’t on the EP and another 6 or 7 that we need to finish up. We’re making an effort, though, because we’re going to be recording pretty soon.

What songs are you going to play at our Imaginary Office Christmas party?
We were going to play “Last Christmas” by Wham, but *ahem* somebody else is playing it. So, we have to pick something else, and then start a big fight.

I guess we’ll just have to be surprised then. Tell me: who’s more important, Santa or the elf?
The elf. The elf makes the damn toys. What is Santa going to deliver if the elf doesn’t make awesome toys?

The Senate Arcade has had a couple of songs featured in Amped 2 and Project Gotham Racing 2. How did that come about?
John Richards sent a bunch of cds to a guy over at Microsoft for PGR2 and he contacted us saying he wanted to use one of our tracks. It was pretty much that simple. For Amped2 we got hooked up by our friend Blue Montgomery who runs Capita Snowboards. Capita has a lot of stuff in the game and passed on our cd to their media acquisition guy to check out. They really liked it and asked if they could put a few tracks in the game. Blue is the man.

Are you a big video gamer?
Not really. I have an Xbox collecting dust at home. I guess I should try out those games, though. I think we’re supposed to get copies of them from someone at some point. I will kick your ass in Tony Hawk 4, though.

What is better… text messaging or IM-ing?
IM-ing. I’ve got a shitty old phone that doesn’t have text messaging. I’m jealous of all my text-messaging-havin’ friends. Seems like a pain in the ass, though, trying to type out messages on a phone keypad. I tried to send an email from my phone once. It took about 20 minutes. It was stupid.

Since we’re approaching the end of the year, what are your top releases of 2003?
Form of Rocket — “Lumber”
Cursive — “The Ugly Organ”
The Jealous Sound — “Kill Them With Kindness”
The Shins — “Chutes Too Narrow”
Gold Chains — “Young Miss America”
And You Will Know Us By the Trail of Dead — “Secret of Elena’s Tomb EP”
Blue Sky Mile — “S/T&
quot;

There are a bunch, I don’t know if I can really make a list. I like the new Death Cab record, the Pretty Girls Make Graves record, These Arms Are Snakes. Form of Rocket is the one to get though. That’s an amazing record.