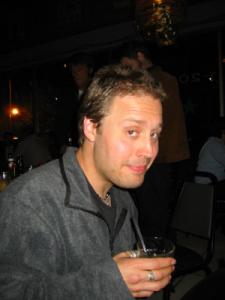 An imaginary Liz, imaginary Dana, and imaginary boy Michael X confession: No one at this CWARS interview drank coffee.

And while we're confessing — John and Samezvous weren't even at the same interview. But we're taking imaginary journalistic license by writing this as if we were all in the same place at the same time, drinking together, thankyouverymuch.

Let's start this off with a romantic question "He said/He said" style. Samezvous, how did Los Halos and Loveless Records fall in love?

{S} Okay. We had the first CD done, and we sent it out to maybe 70 labels, and none of them were even the slightest bit interested — we got no responses. When I recorded "For Ramona," I sent that out, with the same result — nothing. Then we decided to put together a sampler of some of the more commercial, more accessible stuff.

Right about that time, I broke up with my girlfriend — actually she broke up with me — and I was feeling real sorry for myself. I was reading through a magazine and I saw a review of Voyager One. I didn't even read the review, quite honestly, I just saw "Loveless Records" and I thought, "They know how I feel…"

So we sent out the sampler to 50 labels, Loveless included. We were set to sign with Interstate Records in San Francisco. Then I got an email one day from John, saying he hosted the morning show on KEXP, and that he'd been playing the record and getting a good response from listeners. John and I kept emailing back and forth…

After a certain point, it came time to sign the contract with Interstate, but it didn't feel right. So I wrote to John and told him that I was about to sign this deal, and I just flat out asked him if maybe Loveless would be interested in signing us instead, because we shared a lot of similar ideas and similar tastes in music. A couple of days went by… I just sat and stared at this Interstate contract, and then finally I got an email from Loveless that said, "You know what? We would like to sign you."

So John — what about your side of the story? You must get sent thousands of CDs. From all of these, Los Halos was the chosen band, if you will. What about them initially spoke to you; how did you respond to the music when you first heard it; how did that evolve into the band signing with Loveless?
{JR} We do get thousands of CDs. At the time, we weren't very excited about what we were getting, and were considering putting up the "we don't except demos" sign on the front door of the office when suddenly — the Los Halos demo showed up.

I listened to it right before I was leaving for a drive across the state and took it with me. By the time I arrived at my destination I was blown away by the emotional intensity that Los Halos showed. When I got back to Seattle I wrote him an email, and he told me he was putting out the record with some other label but was very happy I liked it. In a way, I was excited about this because that meant I could play the hell out of it on my show without raising flags about playing something I'm putting out. Well, after a while they wrote me back and said, "Nevermind about the other label, we want Loveless." That was all I needed to hear… So they got less airplay and more Loveless play.

Samezvous, are you a full-time music guy?
{S} I'm currently a student at West Chester University. I try to juggle music and school, but trying to do both as much as I want really slows me down. I'm also a bartender at [well-known national chain]. You gotta pay the bills somehow. I got loans, man.

What's your major?
{S} Secondary Education. I'd like to teach Sociology or World Cultures. Maybe Psychology or History — it all really goes into one major pool of ideas.

If you have the music-thing explode around the time you're offered a dream teaching job, what would win out?
{S} Music is definitely my first love — there's no question about that. But I'll probably cross that bridge when I get to it. But if the music does take off… I'm really afraid of flying, so that might inhibit things with touring. I don't have any irrational fears, but I'm definitely completely afraid of flying; it's a real issue.

What's your five year plan?
{S} I don't know. I'd like to be able to make a living… maybe live in a small house and drive a used Toyota, and all I would have to do is just wake up and make music.

Let's talk about your life on the road: In terms of leading the band, where on the tyrannical scale would you say you fall, with nice-guy Conor Oberst on one end and meanie Billy Corgan on the other?
{S} You'd really have to ask the other guys. I think I'm pretty nice, I don't really tell people what they have to play. I mean, obviously because I wrote all the songs, I'm pretty much in charge. But when we play the stuff live, everyone pretty much writes their own parts. I tell them stuff like, "You need to hit the G right here." But however they get there is cool.

John, if you could hear Samezvous karaoke one song, what would it be and why?
{JR} "Roxanne". Because NO ONE can do Roxanne. Samezvous seems to pull off the impossible….

Samezvous, what are your musical influences?
{S} Well, my ultimate musical experience would be… I would love to jam with the Grateful Dead and Bob Dylan. I know a lot of people are embarrassed to like the Dead, but they were a great band. You've got to be able to look past the scene, and admit that they wrote some great, great songs. I never really got into the whole lifestyle; I just think they're a GREAT BAND. I grew up on that stuff, you know.

I listened to Willie Nelson when I was a kid, 'cause that's what my parents listened to. Then I got into Journey in the 3rd or 4th grade. Then when I was
in 6th grade, someone gave me a copy of the Sex Pistols, and I was like, "Oh, okay. Wow, okay. Yeah." And that got me into the Cure, Echo & The Bunnymen, the Smiths…

Anyway, when I was in 7th grade, my friends and I went to a punk show, and they weren't very good. And I thought, "Hey, we could do that!" So I went out and spent $60 on a guitar and an amplifier, and started playing like one string at a time. We kept practicing, and eventually we got better. Better at punk, anyway.

But then at a certain age, I really got into the Dead — I liked the experimentation, how far they could take a song. Sometimes it sounded awkward, but there was always so much going on and play between the members.

The most apparent influence is the album "For Ramona," which was actually written as a response to the song, "To Ramona" by Bob Dylan. It was from Dylan's point of view, consoling a wonderful, beautiful, loving, caring, giving, amazing person who was just wrapped up in something bigger than herself. "For Ramona" was about my brother's wife, who played with us on the first album — she's a beautiful, wonderful person who at the time was battling something bigger than herself, a drug addiction.

John, could you describe each of the three Los Halos CDs in 8 words or fewer. Bonus points if you can do it in haiku format.
{JR}
Los Halos "Los Halos" = One of my all-time favorite records. Ever.
Los Halos "For Ramona" = Los Halos is the new loud.
Los Halos "Leaving VA" = VA stands for Virginia. I love Virginia.

Samezvous, How or why is it that all three albums sound so different?
{S} I really like the Bob Dylan approach to music. Every single album, he kind of reinvents himself, he tries something new. And that's what I like to do. I think all three of our albums really sound dramatically different. I don't want to be one kind of band and play one kind of music over and over again. I'd rather do anything and everything that can be done.

John, what do you think it would take to get Los Halos to relocate to Seattle, and if you succeeded, which neighborhood would he live in?
{JR} Cash money. Or a place to stay. And Samezvous would live in Ballard, as it's the closest thing to the dark Amish country that he lives in now.

Speaking of the Amish and all things Mid-Atlantic region… Samezvous, what's wrong with a west-coast Philly cheesesteak?
{S} You guys are not even close! First of all, you chop up steak and put it in there. It's supposed to be more like roast beef — chopped up really really fine, and then have all sorts of good stuff added to it. We've actually talked about moving to California to open up a real Philly Cheesesteak store.

If we fixed the cheesesteak, could we talk you into moving to Seattle?
{S} I'm pretty cool where I am, actually. I mean, I don't like to live in the city. I lived in Boston for a couple of years, and it was cool — I met some people, I had a great job, but I need to be able to go someplace where I'm by myself and I can do my thing without it being like the designated area where you go to be by yourself. I need to be able to like go into the trees without it being the "place where the trees are." I just need space to be alone without having to lock myself in my room. As corny as it sounds, I like the suburbs.

John, since Samezvous is incredibly prolific, tell us how you and he work together to create a single album from a massive body of work. Do you ever disagree on what should go on a release, and if so, how do you negotiate that?
{JR} Samezvous creates the record and we put it out. I would never disagree with Samezvous. That's how much we respect his work.

Wow. Anything else you'd like to tell the imaginary world about Samezvous, Los Halos, or Loveless Records?
{JR} If we do nothing else in this world, let it be known that Loveless Records gave the world the music of Los Halos. If we were remembered for this, we would look back and say we were successful. That and Samezvous should quit smoking. It's bad for him.

{imaginary boy Michael X comment} Wonderful wonderful stuff, all of it, John. Just one thing: don't you think that Samezvous can't quit smoking? After all, "Happy people don't need cigarettes/happy people just ain't seen my heart yet." And as you know, all great art comes from pain. No cigarettes=no pain=no Los Halos=sad.
{JR} Good point. Two cartons of Lucky Strikes are in the mail.