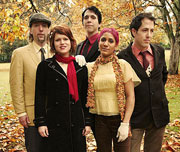 Daylight Basement: Of Fireworks and Fate

"I didn't go through a process of elimination in choosing the songs for Any Kind of Pretty," said Bre Loughlin, the stunning-looking singer/songwriter for the new Seattle band Daylight Basement and former front-woman for Kuma.

"I was figuring out how to do a one-woman show with the laptop, and just grabbed songs I felt like playing at the time. It was just an exercise in learning how to make the music with new tools. While I was working on the old ones, a couple new ones just squeezed out."

Unfortunately, creating something new can lead to the destruction of the old. In this case, fans of Kuma had to deal with the fact that Loughlin wouldn't be able to do Daylight Basement and still continue with Kuma, though the latter depended so much on her devastating vocal and makes-you-weak stage presence.

"In short, Kuma had a rule," Loughlin explained, "No Side Projects. I didn't ask permission to start Daylight Basement. And when asked not to do the side project, I said no. For that, I was let go. The guys stopped returning my calls, except for Neal. He and I talked a lot about where my head was. I wanted to be on the road and play more. I wanted a certain member of the band to be less dictating. I wanted to change the strict rules that Kuma worked under. I talked to my band-mates about it, and how I would do things differently. But starting Daylight Basement without their approval was the final straw."

When Daylight Basement first started, Loughlin wasn't looking to form a full band. "This was only going to be me, myself, and I," she laughed. "I was inspired by The Kills, and No-Fi Soul Rebellion, and Tracy and the Plastics, and was hell-bent on developing a one-woman show. When I came back from tour with Kuma, I was desperate to play more. So I grabbed some of my songs, and started playing them with a drum machine controlled with a pedal. That's how the first Daylight Basement show was. I opened for Gang Gang Dance with just me, a guitar, a drum machine, and a vocal processor that had a lot of timed delays."

This talk of delays reminds me of seeing Daylight Basement live, and being enraptured by the spot-on call and response vocal work between Loughlin and the funky and gorgeous Dejha Colantuono through many of the songs.

"This is why they have those harmonies," Loughlin admitted, "because the original harmonies were written while I was using a delay processor. I wanted to put together an EP to shop to shows with, and started talking to producer Jonathan Plum (International Pop Overthrow, Fighting Machinists, Kuma) about it. I recorded stuff I could play live at Jonathan's studio on Pro-Tools, and used it as playback at my second show at the Croc, opening up for Slender Means and Love Hotel."

Loughlin wanted to learn programming. "But I didn't put the Mac on the credit card until I got a call from our lawyer that I was going to be officially asked to leave Kuma," she said. "Knowing that Kuma was going by the wayside, it seemed important to come up with a way to record by myself and develop the more electronic side of the music. What that meant at first was just learning Ableton, and tracking my Roland keyboard, drum machine, and back-up harmonies."

Some stand-out tracks on Any Kind of Pretty, including "Honeybees" and "Fireworks," came out of the learning process. And "Fireworks," with its almost gleefully-stoic sung observations about the fragility of life and the need to enjoy the damage of living, is easily one of the best songs of the year. "Yeah, it's like, 'Look how pretty it is when I'm blown to smithereens," laughed Loughlin. The track is also very popular with the others in Daylight Basement. "I just think the energy is awesome and it's such a unique song," said ex-Sibyl Vane keyboardist Joey Veneziani, the last to join the group, and whose sequencing work makes Any Kind so distinctive. "It's fun to play," drummer Davis Martin (Maktub) added.

So how exactly did Daylight Basement emerge from a one-woman project to a full band? Loughlin first hooked up with Martin when Kuma opened for Synth Club at Chop Suey. "He got what I was trying to go for. When Davis found out things were going a little sour with Kuma, he called to see what I was up to. I gave him the crappiest CD with layers of my Roland keyboard, synth mariachi tones and all, and drum machine. And Davis just got it.

"I saw her with Kuma and loved her," Martin said. "Bre's songwriting, her weird little melodies and voice, the way she is on stage… she just kicks so much ass and gets so excited. I got her number from Reggie Watts and left a message for her that if she ever needed a drummer, to please call me."

"I love that she spends so much time writing lyrics and screwing around on her computer. I was a little scared until I met her," he joked.

At the same time, Loughlin was just starting to get to know Dejha. "She also knew about the Kuma rumor, and when I said I might be open to more of a band situation, she said she was the bass player. Got a helluva lot more than a bass player," said Loughlin. "I realized I would be pretty dumb to pass up on these opportunities."

Colantuono is in The Rotten Apples, who had performed with Kuma in the past. "But we really connected at a show my band Secret Civilians (now called Ragazza, a collaboration with Joey Veneziani) played on the same bill with Kuma last June," she said.

In addition to Rotten Apples, Colantuono formed The Pin-Ups, originally as a solo project. "Definitely ended up being one of the best bands I have been in," she said. "All-star line up. That band and our album Backseat Memoirs is some of my best work as a songwriter and a player." In addition to The Pin Ups and Daylight Basement, Colantuono is still the frontwoman for Rotten Apples, and also owns and co-runs a spa in West Seattle called Beauty Bar Spa and Boutique.

Guitarist David Bos (ex-Jeunes) joined shortly thereafter. "David and I had been talking for years about wanting to play together," Loughlin explained. "When it became apparent that my one-woman novelty act was developing into a band, he was the first guy I went to."

"I've known since I met Bre that I wanted to play music with her," said Bos. "Daylight Basement is giving me a unexplored territory. Good thing I'm in a band of great musicians; they carry me."

"And I've been friends with Dejha for many years," Veneziana explained of the origins of his role with Daylight Basement. "Bre had heard some of the work Dejha and I had done, and she talked to me about some electronic production for their record. I was excited about it. Bre first passed me off a song (which would become 'Fireworks'), and I remixed it and added lots of electronic rhythms and keyboards. She and the rest of the band were really into what I did, and she asked me if I would do more of the same for the record. I accepted, we developed a really good working relationship while making the record, and they asked me to join the band."

"We're both music geeks, and he is way more proficient at the electronic component of this project than I am. I basically write sketches and he makes them paintings," laughed Loughlin. "The project probably sounded more rock when we first played as a band because my original audio stunk
, and was pretty drowned out in the live show. But the addition of Joey improved the electronic component, making it as apparent in our live show as it is on the CD."

Loughlin's day job is as an organ transplant nurse, which would seem to be too intense a profession for a working musician. "I cut down my hours severely while recording the album," she admitted. "I can't take a clinic job (which would be a way lower stress position) because I wouldn't have as much flexibility." How does she do it all? "I don't know. It gets to me sometimes. I've burnt out before, and wound up waiting tables at Easy Street in West Seattle. But how do I keep writing and performing so passionately? Honestly, that's the only thing keeping me sane right now. It's what means something in my life to me, that I can keep."

Music seems to be intensely important to the lives of everyone in Daylight Basement. For Colantuono, it started when she was young, as her mother was a famous international jazz singer. "She has been very influential on me. My father is also a jazz musician. He plays bass and drums. I have never known anything other than music in my life, as a constant. It is definitely in my blood and I am thankful for that!"

Colantuono says that Daylight Basement has given her the opportunity to step into a very different role as a player. "I get to play with a true team of professionals. It's different from running the show and fronting a band, in a good way. I am learning a lot about myself, as well as just having a good time."

I ask Colantuono about the amazing interplay between her and Loughlin. "I think that I understood what Bre was going for stylistically with her tunes and she writes most of the backing vocals. Singing with a great singer feels great, ya know? That is where the inspiration lies. With these two voices. I think we both know that what we have is something really cool."

This vibrant cast of characters in Daylight Basement reflect the dynamic personalities in Loughlin's own personal life, some of whom became material for her songs.

"'Godspeed Girl' is what someone used to call Tiffany Lines, front girl of The Stuck Ups," she said. "That song was written while I was playing with them. It developed into an ode to the strong women I'm close to in my life." {listen}

As for the earnest, assailable "Crying," she boldly admits, "I'm queen of the crappy relationship. 'Crying' started being written while on the road with Kuma, specifically, in Vegas. My boyfriend at the time said he wasn't dealing with me being on the road very well. I made it clear that this was exactly what I wanted to be doing. So it was time to leave. Again. I've walked away from a lot of relationships. Some of the lines were interjected from my favorite topic of last year, regarding a man who taught me what unrequited meant."

Daylight Basement's dually frenetic and mature sound evokes both meaningful and catchy English new wave bands and the traditional Irish ballads of Loughlin's heritage. While reminiscent to older critics (like myself) of art pop picadors like Lene Lovich and Toyah Wilcox, she also counts the solid songwriting of artists like The Cure and Billy Bragg as influences. ("Robert Smith just killed me when I was in high school, and I was compared to Bragg for being a one woman show with a guitar," claimed Loughlin.)

The effortless switching between frollicksome and dramatic elements is reflected in Daylight Basement's experimentation with different sounds — programmed drum loops, live playbacks of keyboards — and is richly expressed by Loughlin's own three-plus octave vocal range. The resulting song-craft is paradoxically dark and often whimsical electronic pop musings on love and life.