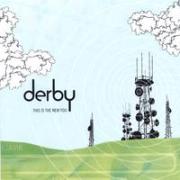 This Is The New You

This Is The New You, by Oregoners (or is it Oreganos?) Derby, sounds a bit more like the old me, really. Influences are worn on sleeves (Brit-pop from my early adulthood writ large on those patches). Songs have a vaguely comforting familiarity (K-Billy's songs of the 70's, anyone?) — and still, something is a bit fresh…

"Jet Set" opens things sounding like a lullaby, but reminds me a bit too much of the White Stripes cut that opens "Napoleon Dynamite" ("We're Going to Be Friends") until it goes all 70's AM Gold (a term lifted from their bio, but so very, very apropos). The chorus, with its electric piano and perfect vocal harmonies, removes any ideas I might have about their rehashing the sound of the particular version of past to which Jack White subscribes. The first name checked on their bio is Canada's own Sloan, and I couldn't agree more with the reference. They don't seem to have Sloan's full-on "rock" capacity, but the pop confections will be very familiar to fans of those northern neighbors.

(BTW — Sloan is coming to Seattle. If you don't know them, you should… and they don't come 'round here often. My friend Amy speculates that this might be because of a show they played at Graceland a few years ago, where attendance was in the neighborhood of ten. This time around they're at the Crocodile. It's the same night as Gang of Four, though. I'll bet if you played your cards right you could make both shows … I know I will. Now, back to your regularly scheduled program…)

Derby also name checks the Super Furry Animals, another apt point of comparison brought to the fore for me on "Sunk a Few," which approximates the bounce of the SFA's "Hermann Loves Pauline" while softening the edges a bit and upping the vocal harmonies. Derby is a lot less intentionally weird than those Welsh wack-jobs (and I mean that in the most endearing sense of the word), and are all the more accessible for it.

The 70's vibe pops up quite a bit, though it doesn't really sound like a 70's release. The nods to mid-to-late-90's Brit-pop are just as strong (SFA, Travis, Radiohead {pre-OK Computer}, Stereophonics {pre-sucking}). It's a bit twee, a bit pop, and a bit bouncy. "Get to the Feeling" and "This Conversation" (which channels the original "Tainted Love" in its intro/verse) are the only tracks that really break rank by being a bit more "rock" (which also makes them my favorites).

This is the New You is a very cohesive album without being too same-y; you can definitely sense a "Derby Sound" by the time you're done here. Derby aren't going to change your life — but they are going to make it a little more palatable with a few spins of this disc.