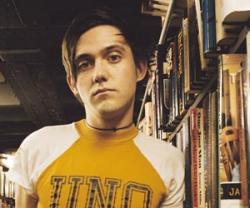 Bright Eyes with the Bruces and M. Ward

{I, Imaginary Girl Liz here do solumnly swear to be a professional and objective music writer and I will not gush about Bright Eyes, Desaparecidos, Saddle Creek Records or anything else associated therewith. Cross my heart.}

Bright Eyes hit the Northwest with an army of 13. The rotating cast took the shape of three different bands over the course of the event, each offering a special contribution to the evening’s ever-evolving landscape. The Bruces bit of Simon Joyner-influenced-alt-country-twang resulted in a mildly curative set that barely surpassed a snail’s pace and a run on whiskey at the bar.

The most startling piece of the puzzle had to be the moment the bass player removed his big wacky gardening hat to reveal a Mr. Conor Oberst. Within seconds the crowd (unsurprisingly) thickened around the front of the stage and previous dismissive comments were replaced with, "Do they have t-shirts for sale?"

On stage next, middleman M. Ward passed the time with his Benicio Del Toro’d unquestionable intensity and contented classically trained guitarist talent. His influences proved to be all over the gambit, the set list integrating 1950’s inspired surf tunes, faint wandering singer-songwriter missives to himself, a New Orleans Lois Armstrong cover, and a hauntingly astonishing version of "Let’s Dance" (who would have known the MTV-Bowie near jingle could take your breath away).

Up until now I feel like I’ve done a pretty good job of sounding even-keel — perhaps even separated from the event. Don't you think? Well, no longer. I must now disclose that Bright Eyes is one of my favorite bands – and with each new release I am further pulled in by Conor Oberst’s musical genius. Yes, musical genius. The lyrics of broken poetry tell truths and fairy tales, all culminating with the same end — leaving the listener speechless, uneasy, and comforted all at once. The purposeful words are set to marching-basement melodies that singer-songwriter types, garage bands and midi-keyboard operators should aspire to. At least that is my opinion — and one that has only been substantiated with a 47% positive response rate for those friends with whom I’ve shared my Bright Eyes stash. Each member of this carefully chosen group of close friends show initial surprise and intrigue when exposed to this hidden part of my soul. The songs are evolved beyond melancholy. Think tragic and angst-ridden, yet hopeful and inspired.

It is with this enthusiastic luggage that I have greeted each Bright Eyes show. This time around, my fervor was rewarded with a set list featuring a few of the best catalog tracks (including "Neely O'Hara," "Something Vague"), a new new new new unreleased unnamed song, a Neil Young cover, and nearly all of the songs on their recently released album, "Lifted or The Story is in the Soil, Keep Your Ear to the Ground" (the only notably absent recent album track was a favorite song of mine that was unleashed in the last tour, "Waste of Paint").

As the ever-changing musical’s cast shuffled into their places between songs, ringleader Conor filled in holes with banter (a bit of a rarity in previous shows), taking on both tongue-in-check showman song introductions ("This is a song that goes like this…") and political rallier ("Originally I was going to call this song ‘Write your Senator or Congressperson’, but now it is called ‘Go scream in the streets because they are all spineless’").

Upon ending the show with a hearty encore and with the most hopeful of his songs, "Kathy with a K’s Song," the crowd was left muted. The first-timers were spent on the emotions thrust upon them in the last hour and a half. The seasoned veterans filed out momentarily satiated with their infatuation, steering them home to listen to their first Bright Eyes album again and again and again.

My imaginary girl friend Marlene complained that we didn't get to hear "And the Calendar Itself," but really, what's to complain about a perfect evening? So I guess the question is, with such a firm part of my heart soaked with adoration for this band, will I ever be able to review a future Bright Eyes show and come up with anything different to express? I am sure I will be able to add something… I will remark on the red shirt or the intimate glances between Conor and his band members. I will review the set list and pine over the missing catalog song I wanted to hear or gush over the new unreleased song unveiled before me. And I probably will.