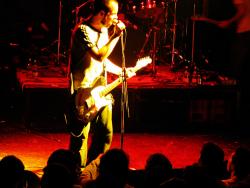 "Have you heard the new mclusky album? If not, what the fuck have you been doing? The album is great! Hold on, let me play you a couple of tunes."

This is the kind of conversation I have been having with friends and loved ones for the last couple months now. The conversation isn't new. These folks are accustomed to hearing me freak out about this or that incredible album. The blank is usually changed out about every 3-4 weeks. (To fall in such love any more often would seem a bit ho-bag-ish, wouldn't it?) In any case, the name mclusky has held a steady position in that blank for sometime now. Heck, they were even the first band to be featured as the "**liz's music pick of the moment**" in our right navigation bar.

You can imagine my… um, mild excitement when I found out that the mclusky fellows were not only going to be in town in support of their 2nd album (mclusky does dallas) but would have a few minutes to talk with me before their show. The days leading up to the interview I brainstormed questions. I even read up on some articles and interviews online to figure out where these guys were coming from and what I should expect as far as a disposition. Yes, I was going to be that perfect interviewer on their first American date on the tour. Yessiree.

And it was all on tape.

And it only makes sense then that the interview tape would suffer the awful painful fate that it did.

All I am allowed to disclose is that it had something to do with a freak hurricane, a cast of skin flick impresarios on the hunt for a red bowling ball and pho loving canine.

Thank goodness I remember everything word for word EXACTLY AS IT HAPPENED(!):

I arrived a few minutes past our loosely agreed upon meeting time at the Crocodile Café and join them as they started in on dinner. I approached their table…

IGLIZ: Hi, I'm Liz… and I am here to meet the Welsh trio who, with their subtle blend of early Pixies screaming and Jesus Lizard and Sex Pistols sensibilities (igLiz casts sly grin), created one of this year's best albums. Do you gentlemen know where I could find such a cast of fellows?

MCLUSKY (in unison): Umm… what the…

PAUL (the intrepid, ever-on-the-ball Tour Manager): Hi Liz. Have a seat. We were just settling in to a fine meal here at the legendary Seattle landmark, The Crocodile Café.

IGLIZ: Why thank you. Please excuse my tardiness; I had trouble finding a parking space. (I pan the table and begin introductions.)Could we go around the table from left to right and each of you tell me your name and how pitchfork.com describes you?

ANDY: Most surely. My name is Andy. I am the guitarist and lead vocalist. Pitchfork likened my guitar playing to a "buzzsaw" and wrote that there are moments when my vocals reach the point of "diaphragm-tearing shouts."

JON: My name is Jon. Pitchfork described my bass playing to "power-riff bash."

MAT: I'm Mat. I believe that the pitchfork quote goes something like, um… "…Mat Harding's drums rolling like hubcaps down a hillside…"

IGLIZ: Cool. Thanks so much for taking a couple of minutes to chat with me. You're album is one of my favorites of the year. It has really affected me. For one thing, I've taken to cursing.

ANDY: Really, what curse word do you fancy the most?

IGLIZ: Hmmm… well I guess it depends upon what the circumstance is. As a rule of thumb, the word "fuck" has proven both appropriate and effective.

ANDY: Yes, "cunt" is a lovely word that is helpful in nearly any situation.

MAT: Yes. I try to use it at least five times a day.

IGLIZ: But is it able to be used in as many different circumstances as "fuck?"

JON: Oh yes. You can use it to denote frustration with yourself. For example, "CUNT!" when you realize that you left your wallet at home and you just ordered a sandwich.

MAT: Or it can be used like "CUNT!" – when someone cuts you off on the road. Such a treatment communicates frustration at others.

IGLIZ: Really? As an exclamation? Like "CUNT, the computer just fritzed out on me!" You are not really calling someone a cunt, just screaming "Cunt!" instead of "Geeez Louise!" or "Holy Hannah!"

MAT: Exactly, but you have to be careful what you yell over here. Your second amendment to the US Bill of Rights allows for people to keep and bear arms. You never know if the person you direct the word "cunt" to is going to actually be carrying a gun and looking for provocation to use it.

IGLIZ: Yes, that is a major difference between over here and the UK, isn't it?

MAT: For example that person over there could be carrying a gun, or that guy crossing the street could be packing heat.

IGLIZ: I know… that is unsettling. It is terrifying to realize that the minutest of action could unknowingly vex someone enough that they could reach under their 1973 Ford truck bench seat and brandish a firearm. It was so much easier when we just had machetes to worry about. CUNT!

ANDY: And subjecting ourselves to all the bad movies that are on TV.

MAT: I woke up last night at 3am and it felt like it was 11am. I am still adjusting. We are enjoying ourselves. Everything is different… but it is the same. It is all a bit wacky.

JON: Yes, like at the gas stations, it is a little bit different, but it is still the same.

IGLIZ: Like the beef jerky. (Believe you me, the crowd LAUGHED at that one!)

MAT: What I like most is that it is so easy to find vegetarian stuff here.

IGLIZ: Yea, I remember how fucking hard it was to find a soy latte when I was in the UK this summer. I went without coffee for over a week! And in Seattle there's a ton of great vegetarian and vegan restaurants to choose from. At most of them, even a meat-eaters palate would be heartily satisfied. Did you have a chance to partake in Seattle's vegetarian-friendly offerings?

MAT: No, we've basically just seen the hotel and KEXP.

IGLIZ: Oh right, you did a live session over there this afternoon. How did it go?

JON: It was great.

ANDY: Yes, it was cool. They were all really nice down there. I thi
nk it went well.

IGLIZ: I saw on your website that you were wearing a Lambretta t-shirt. Do you all ride scooters? Does that mean that you prefer Lambrettas over Vespas?

ANDY: Actually, that was my brother's t-shirt. The only incident I've ever had with scooters is that I nearly died on one.

ANDY: I was doing this trick for a Japanese TV show that required me to light myself on fire and drive the scooter over a pyramid of feisty panda bears. Sure, it sounded risky… but I knew I would be ok, and what is the saying… "Pain is temporary. Glory lasts forever?"

IGLIZ: Yes, I think that is it. Do you all have any scooter stories?

JON: That can compare with that one? No.

MAT: Me neither. I have stories of my adventures with lighting myself on fire, but nothing with a scooter.

JON: I hate wearing t-shirts with a logo or a corporate message on them. It would be interesting to wear a t-shirt that said something like "Kill Whitey!" on it and then have some band name themselves "Kill Whitey" from it – but then there already is a band using the moniker Kill Whitey…

IGLIZ: Yes, at this point in time between corporate branding and the music industry I wonder if there will be a point in which the "billboard space" on music performers' chests will be for sale. I bet the Weezer t-shirt real estate will go for a fortune. Perhaps things have already gone the way of the NASCAR racer attire and we just don't know it yet. Speaking of the multitasking rock-star, if you all had your own side projects, what would they sound like?

ANDY: Mine would sound more like Frank Black — but Black Frances– Frank Black… before he started sucking.

IGLIZ: Yes… I feel your pain.

By now it was time for them to set up and for me to head home to put my interview tape and tape player into my fire-resistant safe-deposit box. Which I did. And yet still the unthinkable happened. Thank goodness for my PERFECT WORD FOR WORD RECOLLECTION OF THE ENTIRE CONVERSATION.

IGLiz's PERFECT MOMENT BY MOMENT RECOLLECTION OF THE MCLUSKY SHOW:

The Crocodile was about half full, but the buzz of energy and anticipation made the place feel as full as a clandestine Built to Spill show. We were all there for the same reason: to witness the band who gave us "mclusky does dallas" thrust their raw LOUD intensity into each of our faces. I was nearly jittering with pre-show anticipation and a bit scared.

A voice exclaiming, "Whitney Houston, we have a problem" blared out of the speakers as Andy (vocals/guitar), Mat (drums) and Jon (bass and donning a puffy space mask) made their way on stage.

They started off with "lightsaber cocksucking blues" – and rightly so… this is first song on their album and the same song on that knocked 87% of us off our rockers the first time we heard the album. Stunned at the sheer magnitude of the alt-metal-rock strength of what was before me, I looked around at my audience compatriots and the look across our faces was the same as mine: "CUNT! They're actually fucking doing it! They are fucking right here in front of us and are actually fucking pulling it all off!" At the end of the first song, we (the audience) released a silent sigh relief.

It was just what we imagined. Andy with his calculated potency on the guitar and vocals, Mat with his "zen drumming," (thanks TC) and Jon who conquered the bass with the wizardry of Joey Santiago (Yes, I mean Joey – not Kim Deal).

They covered the rest of our sing-along favorites, "the world loves us and is our bitch," "collagen rock" (introduced by Andy with the line "This is from our second album, Parachutes"), "whiteliberalonwhiteliberalaction," "to hell with good intentions," "alan is a cowboy killer," "no new wave no fun" – they were all there. Shouts from one audience member to another like "These guys are amazing!" and "Fuckin A" reverberated between songs.

As the set progressed, and their stage banter became more frequent, the shocking truth became undeniable. They are nice, disarming, charming, funny guys… and the bassist even opened the mic to a discussion centered on the Monorail issue.

That's it, my mom is getting this fucking album for Christmas.

By the end of the show I had taken out my earplugs to make sure not a molecule of sound was missed. (Kids, don't try this at home!) if I was going to go deaf, it would be worth it. Little did I know that it wouldn't be until three weeks later at the Cato Salsa Experience / Soundtrack of Our Lives show that such a fate would arise.