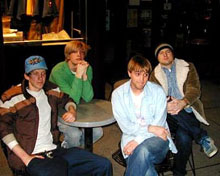 Cutest Band in Seattle Contest 2003: In Praise of Folly

In Praise of Folly opened up a promising lineup for the Cutest Band in Seattle contest, a benefit show to help the YMCA's all-ages Fusion Cafe buy a stage. My first thought was: this guy looks like he could be in the Ocean Blue. My next thought was: oh, I am probably the only person here who *remembers* the Ocean Blue. I'd better think of something else to write about them.

As it turned out, they provided plenty more cuteness fodder for my imaginary pen. Physically, the band members were all skinny cute indie-rock boys (if you doubt me, consult with these photos), with frontman Benjamin's blonde mophead and awkward gestures that were sure to make the girls swoon. I would have liked to see more interaction, more animation from them — as my limited post-show interaction with the band confirmed that they indeed have sparkling personalities. Onstage, they spoke little, and gazed downward at their beat-up shoes.

Luckily for us, we had the assistance of two honorary-imaginary-all-ages correspondents for the evening, Summer and Alisha.

Alisha said, "Their sound was very melodic and just generally good. It would have been nice to see them move around a bit more, maybe get the crowd involved, but it's rough playing first. As far as the cutest band thing, the lead singer had those pretty boy good looks, the guitarist was adorable, the bassist was manly, and the drummer looked like your best buddy from down the street. They were cute, but most people didn't come in until after they'd played. Along with that, they were strictly musicians — they didn't go there to win a contest, they were there to play a show, and I really respected them for that."

I understand Summer's… um… admiration of In Praise of Folly. A full 100% of the band was visually cute… and their sound was untainted boy next door — ideal for nights cruising in around in the station wagon radio. On stage they had a respectable amount of nervousness (i.e. the lead singer's strategic foot curl). Their songs felt longer than your average radio song, yet the falsetto/wispy wondering vocals mix and guitar swirl kept my attention. All in all… cute cute cute.

For those of you who haven't gotten enough of these shoe-gazing heartthrobs, you can catch them with Carissa's Wierd and The Prom at Graceland. On Valentines Day. Awwwwww. Could that be cuter??