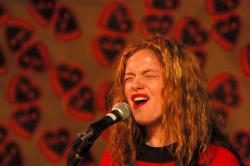 Yes, again with the Visqueen.

We couldn't help ourselves. There they were opening up for that kickass New Zealand band The D4 (you'll read about them next). On top of that, we weren't sure if we could make it until the February 11 release of their album King Me to hear "Omaha."

Obviously, we had no choice.

Visqueen are so consistent in their indie-rock-girl-power-rift-infused perfection. To hear it live only confirms that the concise rhythm and silken vocals with a shot of scratch aren't just the products of a fine producer — in other words, unlike many artists today, Visqueen are as good at playing live as they sound on record {have you heard that Kelly Osbourne album?}

Tonight's show was no different. We all had our booties rocked, and Rachel and Kim made us giddy with their banter. Rachel pushed the envelope by discussing spit and later told us she'd lost a bet, which required she wear the "perfect Motley Crüe Groupie boots" the rest of the night. Kim made sure the band started the next song before things went to far. Yes, another fine night with the family Visqueen…

We also went to the in-store performance at Easy Street Records on Valentine's Day, where we not only got to buy the CD, but also got our friend Ryan to take these awesome photos. We couldn't bear to hold onto them until next issue, so we're posting them right away…

Not to mention that Visqueen themselves said — enough with the Visqueen articles on your web site!! We think we'll officially become stalkers if we write about them again next issue. I think we've already made our point: yay for Visqueen!