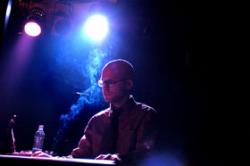 Carissa's Wierd: For the next 50 years we will still write you love songs

Shall I compare Carissa's Wierd to a Valentine's Day? They are more somber and more elegant.

Could there be a more perfect Valentine's Day show than Carissa's Wierd? Whether lonely-hearted or blissfully coupled or somewhere longingly in-between, igLiz and I both knew as soon as the show was announced that this was where we'd be spending the holiday of hearts.

Any regular readers of the site know that my adoration for this band has no bounds. They inspire hope, they comfort, they allow for the solace that only darkness can provide. For me, the music is incredibly personal and powerful, nearly sacred…

Live, this translates to either transcendently beautiful or painfully jarring, depending on whether 1) there are no sound difficulties and 2) whether the audience can just shut up and pay attention (see Graceland CD release party write-up for a full-on expression of my ire when the audience is non-cooperative).

But we're not here to talk of hatred now. It was the dia del amor, and this seemed to put everyone in a contemplative or swoony mood. The audience was ardently respectful, taking care not to gab over the exquisite silences or clink glasses over the heartbreakingly narrative vocals.

Plus they sounded even stronger and more confident live than I've ever heard them. Frontman Mat Brooke even stood the entire time, the vocals were louder, they smiled and they even dressed up for us. Decked out in ties and pressed shirts, they looked absolutely spiffy. There is little sexier than tattoos peeking out from dress shirts.

I'm not sure if it was the holiday or if their excitement about the fact that the next show they played would be on their NATIONAL tour, but it was the most comfortable and assured I've ever seen them. It is safe to say that this was my favorite of their performances.

I am not just saying that because I labeled them my Valentine's Day date, either. But now that I mention it, just for the record — if you've never done the "date with a band" thing before… you should. Being on a date with five people is great. It is usually someone else's turn to run to the bar and the conversation never gets boring.

Signs and swoons. The Carissa-ed violin resonated like heartbreak, and the keyboards echoed to hope. Was there anyone who didn't find some source of inspiration from this performance? If only I were a poet, I'd write an "Ode to Carissa" instead of some silly music review that will never do them justice. I'd write it in iambic pentameter, and it would make you yearn 'til your heart ached.

But since I'm not, I will instead provide some wise words from some of the cooler cats who we talked to at the show, as we weren't the only ones enamored with the Wierd ones that night…

Fellow attendee and all-around super-guy Michael McGonigal (Sad Robot Records) said, "I fell back in love with Carissa's. They looked so nice, they played such a great show, I re-discovered them that night! I don't think I've ever seen them play that well ever before — their shit is SO TIGHT right now."

He continued on to say, "I would love to date the entire band, but of course that would not be cool — record label guy dates all five members of band on his label, people would be in an uproar. Because even though there is admittedly a LOT of Mike, clearly there is not enough Mike to go around, and that just wouldn't be fair, to any of them! It would be scandalous, to tease others so maliciously…"

What Mike doesn't realize is that he can't date the entire band because they were my date for the night. Sheesh!

Other feedback we heard about Carissa + Valentine's Day…? When we asked our imaginary boy friends Greg and Tracy, they kinda looked at us with that look-thing they do before muttering something about another round and then staggering barside for more Jack and Cokes.

But we already know how those guys felt — they are such hard-core CW superfans they wouldn't miss a show, no matter if it was Valentine's Day, Mardi Gras, or the eve of the birth of their first-born sons. So no further comments were needed, really.

Our newly-imaginary and new to the live CW experience friend "Lloyd" was overheard saying, "C.W.'s set was beautiful and tender…. the setting was quite romantic and perfectly suited for loving couples as well as new acquaintances. All in all, a great setting for a first date or V-day outing."

Imaginary photographer Ryan Schierling was so moved by the show he wrote us an entire article. And here we thought all he could do was take pretty pictures!

"I had every inclination to drink myself into an alternate universe on Feb. 14," he muttered, "But with In Praise of Folly, The Decemberists, The Prom and Carissa’s Wierd playing at The Crocodile that evening I decided to forgo the alcohol-fueled self-loathing pity party and shoot some photos. I could always drink myself into a loveless stupor the following night, right?"

Read all of Ryan's ramblings….

Back to the show. Death Cab frontman Ben Gibbard joined them onstage to cover an Avril Lavigne song. You know, that famous one, causing igDana to fall over herself in a libation-fueled pop-music-infatuation-haze to rush Ben post-show to tell him just how much she loooooves the new Postal Service CD.

Yeah, I'm sorry to say that's a true story. In a fit of post-show kissy-bliss, it suddenly seemed overwhelmingly crucial that I stop Ben, who was just minding his own business, and gush on and on {see Rhett Miller for further details on how mortifying this practice can be}. Luckily, Ben was as charming and gracious as I would expect him to be. He uses his powers for good, and this blathering idiot appreciates that.

{But can I mention one more time how much I really love that Postal Service CD?}

Know what else I love? I love that our local Carissa's Wierd has quite the national tour schedule planned, including a performance at SXSW at the end of March. Awww! I swell with hometown pride! They're touring with the Prom, and also playing several west coast dates with the Long Winters (we heart Barsuk!)… which just might be worth the cost of a plane/train ticket or a road trip…