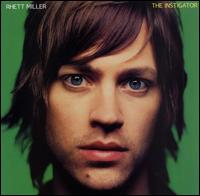 Dear Rhett: Can I kiss your furrowed brow and calm your nervous heart?

A question for our readers: is Rhett Miller the most gorgeous human ever to grace a stage, male or female? And if so, does this discredit him as a musician? And more importantly with a question like this: why don't we have a photo of him to go with this review?

The answers: Yes. Abosultely not. And because-the-show-was-too-crowded-to-get-anywhere-near-the-stage, and when we met him post-show, his beauty was so powerful that the camera failed on all three attempts to take a snapshot. 'Tis true.

Although I am going to spend the rest of this review pointing out Rhett's singer-songwriter prowess, I should also address igDana's Rhett-enthusiasm as it is understandable. It has been documented in many a quilting bee that Rhett is not only a, um, looker… but also is one of the kindest, sweetest, friendliest gentleman this side of… well, anywhere.

An added bonus to discussing this is that I get to reveal the best part of the whole igDana—Rhett encounter: When Rhett leaned over to hug our infamously outgoing and disarming igDana to thank her for coming by the merch table, she was rendered speechless by his bounty of outer and inner beauty. And I am not talking temporarily speechless. As I will expand upon below, our heroine was unable to recover for the remainder of the exchange. An occurrence most out of character; in all my adventures with her, she has never before even come close to a hesitation on a word.

Oh no… please say you're not going to tell the Alex Chilton part of this story…?

Ok… I'll fess up before Liz proceeds to humiliate me. I purchased Rhett's album, "The Instigator" after the show. Not only did Rhett sign it, but he also sang Big Star's "O, Dana" to me.

…and it's a GREAT CD, produced by the incredibly talented Jon Brion. There are photos of Rhett on the cover. Up-close and dreamy photos. But really, buy it for the music. (No, really!)

Woah… not so fast lil one! You musn't skip over the best part…

…The part when Rhett asked you if you had ever heard the Alex Chilton song "O Dana" that he just sang to you and you responded with, "No, I only know the Big Star version." Which, for our readers at home who haven't gotten to the B/C section of their Trouser Press Guide, is just about as funny as someone asking you about a Jack White song and you saying you only know the White Stripes version.

{igLiz falls to the floor in hysterics for the 43rd time}

Oh yeah. What makes the story even more deliriously funny (to others) is that I had just received a 2 hour dissertation about the history of Big Star/Alex Chilton (including sound samples and visual aids) from a pop-music-obsessed friend mere weeks before, including a special chapter devoted to "O, Dana."

{imaginary aside: "O, Dana" has come as a great comfort to me, as I still haven't recovered from the crushing childhood heartbreak and jealousy that "Oh Sherrie" caused.}

Anyhow, all that new knowledge, streaming from my short-term memory at the first up-close glance of that radiant gold-capped smile. I'm an idiot.

So um, igLiz, shouldn't you be talking about what a great performance Rhett put on and how he covered a couple of Old 97s songs…?

{igDana pulls igLiz up off the floor}

Apologies for digressing. You're right, I am not here to mock igDana.

Back to the important part of the conversation.

Rhett is a touring machine. He always has been. I remember a couple of years ago when he and the Old 97's played like four shows in Seattle in two months. Even for a Seattle band such a hectic tour schedule would prove difficult… and those boys were based in Texas.

So no, you are not mistaken. He WAS just in town a couple months ago promoting The Instigator {his first post Old 97's solo effort}. Last December, he hit the Chop Suey audience with a both a full band as well as the classic singer-songwriter solo acoustic set. Because he was the headliner that night, he was up there for hours and fully covered both his solo material and a wide range of Old 97's tunes.

At this evening's Showbox show, he had a similar mix of old and new, except this time he was armed only with his acoustic guitar and an opening slot for one of the singer-songwriter of all singer-songwriters, the honorable Neil Finn. Such a line-up pairing was so obviously perfect, I {along with many other Seattle-ites} exclaimed when the line-up was confirmed. Neil with his Split Enz/Crowded House lineage and Rhett with his well-versed Old 97's work… two talented and nummy former frontman, uniting on a single bill. The whole thing makes that Billy Joel/Elton John look even less worthy of all the hype.

Did we have "charismatic" on the list of Rhett attributes? My oh my, that boy can stir up a crowd. We found it endearing that he played some of igLiz's favorites {"Four-Eyed Girl" and the Old 97's "Barrier Reef"} and did a pseudo-cover that will live in infamy. He put his own Rhett-esque lyrics to the national anthem "America" and transformed it into a much more "Erica" tune. Nodding to the present infuriating and frightening state of world affairs, he introduced the song by commending Seattle's recent "kick-ass" anti-war demonstration. The crowd cheered in agreement.

The subtle cynism of that tune in the midst of the usual brokenhearted and in lovestruck Miller originals left us all cheering for more.

The crowd was primed for Mr. Finn.

And let's not forget about that whole Alex Chilton/Big Star portion of the story.

I'm never gonna live that one down. At least not until I say something equally as stupid to someone equally as hot. Except I believe both would be impossible to equal…