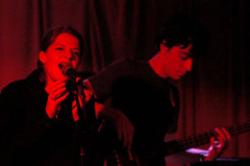 The Feverpitch, Ravenna, and The Preons

Ravenna admirably opened a Chop Suey Wednesday night with smooth pop-melodies made most notable by the vocal stylings of Shelby Earl. She rang with an incredible, clear (and clearly trained) voice, with nearly theatrical intensity and skill. I bet she starred in musicals when she was in high school.

In fact, I bet Shelby was that girl I resented in my elementary school chorus because she got to sing lead in the recitals every year and wear the special dress or even a crown, while I (with my obvious charisma, but lack of vocal prowess) got stuck in the background wearing the same stupid white starched shirt everyone else was wearing, staring on in envy and listening to her gorgeously sweet voice. She's that kind of good.

I hated that girl! But I liked Ravenna! {really, I'm over the whole chorus failure — really I am…}.

I thought their name a bit odd — Ravenna, a nice neighborhood just north of the University district. But then, they sounded just like a nice Craftsman home in Ravenna (or perhaps Wedgewood? Or Maple Leaf?), comfortable and familiar and something you would want to share with your friends. There was a Sarah McLachlan-ness to her voice, light but not wispy, mountain-fresh and airy like the Gorge. I'd like to see them tear it up a bit more though — perhaps they could incorporate a "Guys and Dolls" dance routine?

Sure igLiz, rub it in…

First of all, cause I know she's not gonna mention it, igDana nearly killed (or at least paralyzed) herself tripping on the newly installed elevations at Chop Suey…

Then we found out that Feverpitch frontman Joe Davis got shot with a five-inch dart in a drive-by shooting just outside the club right before he entered. Yipes! Was something going on in the stars that night or what?

Yes, yes… I did trip and fall walking to our seats in the new "upper" deck. It was my first time to Chop Suey since they added those steps "up"… and surely I'm not the only one who has tripped! Last time I was there, the landscape was entirely flat – no levels. Those steps are hard to see!! {Tell me folks, am I right?}

I had missed that show, but was intrigued to hear them after reading in my Morning Faithful email that, "Feverpitch should be the next big thing" and that tonight would be an "Excellent bill of the local up and coming." When Mr. Richards issues comments like that, never take them lightly.

And he was right — with members like Ex-Pinehurst Kid Joe Davis (on lead vocals and guitar) and current Pris mainman Burke Thomas (on percussion), the Feverpitch had no choice but to dazzle with a force that neither rain, nor sleet, nor snow, nor hail, nor five-inch-long-darts could contain. I found their thick rhythm sections under their melodic rifts and slightly-gravelly vocals refreshing against my usual indie-pop-introverted-brit kitty. Each member of the four-piece boy band strategically filled their songs with enough volume and energy to fill the Kingdome®. Yes, even after a dart had punctured the lead singer's leg.

The only thing that could have topped them ending the set with a Feverpitch'd version of Tears for Fears' "Everybody Wants to Rule the World" would have been if Joe-wounded-by-dart stayed after the show to man the merch table rather than seek medical attention ASAP.

Oh wait — they totally did that! How Feverpitch Rock & Roll is that!?

The fabulous Burke Thomas will also be performing at our Rockstar Suicide Karaoke First Birthday party (perhaps a little "Brass in Pocket?")!!

Oh, the luminous Preons. Ever since we were lucky enough to find ourselves at their first show back in March, we've been addicted to the three song demo they gave us. Thank goodness they put those songs on their web site for all to hear the gently enticing male harmonies with beautifully complementary female back-up vocals. Add in a DJ-sample-master splashing in during and between songs, a trumpet and a xylophone to the treasured traditional indie-rock keyboard/guitar/bass/drums mix, and you have an idea of the calming jangle with which they soothed our new-Chop-Suey-leveled-floor-plan-bruises.

And by the way… I'll go ahead and admit it… by the end of the night, I too performed my own, "Oh me? I didn't trip, I always take steps down like that" dance step… multiple times (!)… resulting in both slightly-splashed drinks and a couple bruises. With that mental note made, now I have two take-aways: 1) Chop Suey has levels. Beware. 2) You can't complain about tripping on levels when a guy got shot with a five-inch dart in a drive-by shooting and still went on to put on a show.

The Preons' Josh Cowart will face his karaoke fears to perform for YOU at our Rockstar Suicide Karaoke First Birthday party!!