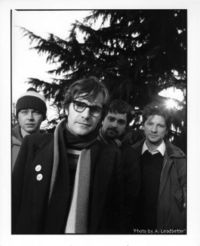 The Bluetones in the U.K.

For me, one of the things I longed for most was the opportunity to see the Bluetones perform. From the moment I first heard them, I was in love. Their debut album, Expecting to Fly, offered a ray of light and beauty to the stifling dankness that was my life in Phoenix, Arizona in 1996. I have yet to find a person who does not fall in love with one of their first singles "Slight Return" at first listen.

Their super-produced mix of pristinely delivered lyrical hooks overtop of the most clever of guitar playing, responsive yet ingeniously autonomous bass (if the bassline in "If" doesn't make you weep…) and crisp subtly motivating drums leave you unable to categorize it as anything other than under the umbrella of Britpop. But, alas, even with all of this I.G. Liz love, they weren't going to be making their way to Seattle – or even the US anytime soon.

So, when I found out they were indeed going to be playing in the UK during my visit… well, I didn't regain consciousness for hours. As I researched the dates of their "Promenade Tour" that I feasibly could attend, I realized that I was not only going to be able to see them perform twice, but also I was going to be visiting some out of the way English seaside towns (i.e. Blackpool and Whitehaven). Bonus!

Prior to my departure, I researched Blackpool on the web – and consistently, one common claim kept cropping up – "Blackpool is the Las Vegas of the UK!" I found this to be both an exciting and frightening concept. Upon a thorough personal investigation I can confidently state that rather than the Las Vegas of the UK, Blackpool is the Atlantic City of the UK. Tons of Kitsch: seaside staples like the slightly dilapidated "Funland," an Eiffel Tower-esque iron structure at the end of the promenade, and cheesy postcards depicting their "Famous Donkeys" were at every turn. I had no trouble filling my countdown hours to my first ever Bluetones show.

The Spanish Hall in the Winter Gardens Center was beautiful – like the Peter Pan ride at Disneyworld beautiful. The floor was a well-kept wood floor under an exceedingly high ceiling of exposed wrought iron beams and skylights surrounded by fluffy painted on clouds. In each corner, about 20 feet up, there was a different and intricate mini-recreation of old-world Spain. What an appropriate venue for my first Bluetones show: A fairy tale'd up ballroom.

Tonight's show had two opening acts: Ricky and The Crescent.

Ricky is a quartet (to the naked eye, they are a quintet – but I'll go with their website bio which explains that there 4 members of the band and a session drummer) from Portsmouth and has a management deal with the home of the Bluetones at Superior Quality. My uninformed stab connection between their band name and sound? There is a 99% chance that I am wrong, but I think it is a nod to the squeaky clean, barbershop melodic Ricky Nelson feel (aurally and lyrically) of their sound. Take that and add their self-professed influences: Teenage Fanclub, The Byrds, Crosby, Stills & Nash and you have an idea of what they offer.

No fancy outfits on these boys and they reminded me of guys who can quote from "American Pie." At this show they were not extremely happy with the way the chips fell. It seems that the lead singer had a bit of a cold, their equipment was kind enough to keep squeaking throughout the performance and they didn't have the chance to do a sound check. Regardless, I did find a couple tunes in their set that piqued my interest in them enough that I looked forward to seeing them again the following night in Whitehaven.

The second band standing between me and my first ever Bluetones show was the Crescent. Four lads from Liverpool (yes, the same Liverpool that is home to one of the best bands ever: CLINIC!) who have proven themselves to be mighty fine studies of Trouser Press's best. Blend melodies of The Small Faces, the vocals of Cast (which is extra interesting as they used to work with the other La's guy Lee Mavers) and the on-stage presence and attitude of Oasis (I will try not to hold this against them as I proceed with this review) and you have an idea of my 30 or so minutes with them. There wasn't one standout song – each piece fit comfortably next to each other. This consistent flow of musicianship made me feel like I was witness to the next NME cover band.

…and then …after a short stage set up and "check, check, check" the Bluetones waltz on-stage. The guitar rift hits the speakers, the bass and drum follow suit and a tear trickles down my face due to the enormity of my happiness (folks, I swear I am not a crier! But give me a spectacular concert moment or an Elvis Presley Graceland tour and I can't help myself). Within seconds I gathered myself and the thought right after the 'They ROCK' exclamation in my head was admittedly a bit silly: Mark has a BEARD! Mark Morriss (lead singer) surprised not only me but others (I heard my neighbors comment as such) with full-on facial hair. Not a big deal at all, as who really cares? It is just one of those things I had to mention as in all of my years of reading Bluetones' live reviews and show pictures never has their been mention of a possibility of a beard. So there you go kids, next time you see the Bluetones – be prepared for anything: confetti, mega-charisma, laser lights, or facial hair.

Throughout the show, the minimal on-stage banter (more than say Radiohead, less than say Robyn Hitchcock) preserved their pristine live sound without distraction. It was raw enough to arouse the troops, yet perfected enough to convey the silkiness of their songs. Their sound was tight, and their stage presence comfortable and enveloping (or was that the smoke machine?). Mark has a Liza Minelli-like allure while Adam (guitar), Eds (drums), Scott (bass) hold the whole thing together with their subtle decorum.

They dished out the classics "Bluetonic," "Solomon Bites the Worm" and "Autophelia," a few rare b-sides such as "Blue" and "I was a Teen-age Jesus," and new songs like "After Hours," "Persuasion" and (my current favourite) "Freeze Dried Pop." They did the encore thing and topped off with a song that was played 146 times in the 30 days before my trip on my cd player. When they launched into the bass line of "If" my jaw dropped in disbelief of the perfection of the moment. The crowd agreed and we danced with such force that the aforementioned fine wood dance floor nearly bu
ckled under the fervor.

24 hours later, I am in another seaside town – this one much smaller than the day before. Whitehaven is an incredibly cute town on the northwest coast of the Cumbria region of England and is home to such notable landmarks as the gravesite of George Washington's grandmother and the Rum Story Museum. Luckily I arrived on "Whitehaven Carnival Day" so I not only was able to experience my second Bluetones show, but also an adorable small community parade complete with local school marching bands and neighborhood dance troupe interpretations of popular music (i.e. Madonna).

With such excitement, I had no trouble passing the time until the show. Tonight's venue was the Civic Hall — a humble town hall-like place that serves as the town's main venue for live entertainment (be it cover bands, touring bands, theatre performances or class reunions). Once again, Ricky and the Crescent opened up. My second evening with these boys left me with more (not necessarily intelligent) insight into these boys:

My second day of Ricky notes only remind me of the following facts (term used loosely):