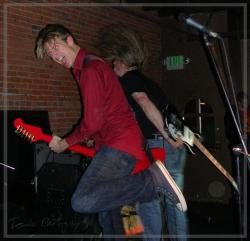 Pistol for a Paycheck, with Snitches Get Stitches

In keeping with igChar's recommended weekly theme of going to see bands with silly, interesting, or otherwise wacky names, we headed to Graceland the Monday following July 4th weekend to catch two local bands who have been passing our imaginary radar with notable frequency of late: Pistol for a Paycheck and Snitches Get Stitches.

Well, technically we went to half of Graceland. They had the front section (including the bar) closed off due to wet paint…I'm assuming that's what that smell was.

Ok, allow me to rephrase: we headed to Grace on Monday.

No, the front section was closed off, so we went to Land on Monday.

Char, can we talk about the bands now?

Oh, sorry. I'm babbling — must be residual effects of the paint fumes. Basically, we went from ho-hum Monday blah to Rock and Roll stage thrashing in 2.2 seconds once Pistol for a Paycheck took the stage.

I think the fumes affected the bass player {and apparently, my concentration skills}. Even when they weren't playing, he was jumping around doing the happy dance. It's rare when the bass player is the most animated one on stage {and believe me, it's not like the others were exactly stationary…}.

The lead singer looked like he should be skipping along a sidewalk trying to catch the ice cream truck, not fronting a rock and roll band, which made him even more delightful. Especially when his voice was anything but sweet…

I felt like I was watching my cute kid brother or cousins play, it was so intimate {what with fewer than 10 people in Graceland on a Monday night following a holiday weekend and all}, and they were so endearing. That is, endearing in a super rock and roll bad ass adorable male relative sorta way.

It was definitely interesting to note the duality between their obviously sweet demeanors (and faces) and witty stage banter, the driving punk-pop thrash of their music. Could it be possible that they're second CD was really called, Into the Arms of the Mother of Hate? Well, on their web site, they proclaim themselves to be, "Like razorblades in a candy bar!!" So you'd better watch out for these boys…

I got that warm boy-next-door fuzzy feeling too, despite the gorgeously excruciating volume of their music. My favorite thing about this band was there's silence and then there's a song. No prelude, just straight into the rock. No foreplay, no mints on the pillow afterwards. Just RAWK!

Speaking of the rock, Snitches Get Stitches definitely get my vote for most chuckly band name of the moment, what with it conjuring images of Harry Potter sporting events and star-bellied Dr. Seuss characters, it speaks to both my misspent childhood past as well as my inner child nutured by a heavy ongoing diet of JK Rowling. I expected cute, poppy, quirky sounds to emanate from that stage. They sure showed me!

Did you see the part when the drummer had to skootch his drumset back because he was hitting so hard, the set was running away from him? I love it when a band can play their hearts out, even in an empty-ish setting. If they were being reserved because of the crowd size, I'd be scared to see them play a full house. So much energy {double exclamation point}.

While listening, I found myself struck by another Snitches Get Stitches paradox. When I looked at the guys onstage, I saw my friends, my co-workers, that cool guy I see nearly every day at a cafe… I didn't see the annihilation of punk fury that was Snitches Get Stitches!

Oh I know! But I like that. I bet all those guys have quiet sorts of day jobs, so they store their fury and nervous energy up for the show nights, when they can unleash it with a might that nearly knocked our earplugs straight out of our ears!!

They ranked approximately 6.7 ouchie decibels above acceptable imaginary Monday night punk-rock-noise-debauchery level. They blistered so hot, I can't believe the freshly primed and painted Graceland walls didn't dissolve into a sticky smoldering pile of red and black goo. Come to think of it, I might have seen some goo on the floors at Graceland… but that's another story entirely….