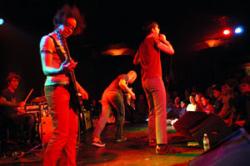 The Thermals: I can't fucking stop thinking about you!

How can I bow down and textually worship this band more, to convey the depths of my newfound adoration for this punk-pop miracle that has entered and enriched our imaginary worlds?

To catch you up: I first saw the Thermals open for Hot Hot Heat a few weeks back, and was intoxicated by their incredible energy and smashing stage presence. I was literally aching with excitement when I found out they'd be opening for Death Cab for Cutie so that I could see them again.

The Thermals go right to your head!
igDana has been gushing about the Thermals for weeks. And to be honest, I was still so broken up about having missed Hot Hot Heat for a second time this year {Oh Goddamnit!!} that I discounted the whole Thermals piece of the evening. You know how it is — I was already crestfallen, and here igDana adds in this whole, "Omigod, the opening band blew them away." Such torture was more than I could handle and this resulted in me blocking the whole thing out.

Thank goodness for igDana's tenacity. She brought the 4-song EP to play in my car for a drive-to-the-show cram session. By the time we got down to the Showbox, I was dizzy from excitement and didn't even want to get out of the car because I couldn't bear to wait another 40 minutes to hear "No Culture Icons" again.

And it's been in her CD player ever since. At home and in the car. Seriously. It's my CD and I want it back!

Did I mention there are only four songs? Yep, that's about all we've heard for days now. "Everything in circles…"

I know this is further delaying our recap of the show, but I feel like perhaps you all can't understand the magnitude of this situation. Imaginary Liz has at least 18,362 CDs at last count here at TIG headquarters. Liz is always introducing me (and the rest of us lucky enough to know her) to new music. I've never heard her play a CD two times in a row before, EVER, no matter how deep the musical infatuation. Suddenly Liz has regressed into some idiot-savant 12 year-old who has made a mixed tape consisting of her favorite song only, repeated during all 90 Memorex minutes; she's rocking back and forth rhythmically — chanting lyrics like mantras during homeroom, in her 81 Datsun, and under her sheets at night where she's snuck her sweet headphones after bedtime. "Hardly art, hardly garbage…"

"Some are tight, some have trousers. They guarantee life eternal. You only need skin and bones…."

{rocking back and forth, clutching pillow for support…}

The Thermals have sex in your bed!
Our Thermals-thirst comes in four shades of purple.

And on stage, holy mandarin and soda with lime! Frontman Hutch Harris was jumping to and fro… never faltering from the pristine vocals he crams down your throat with purpose. Kathy Foster… she is probably one of the few people in the world who can share a stage with the magnetic Hutch. She's got bass-prowess and understated charm, on top of being massively cute.

{imaginary aside: the two also played together in the "twee/folk-pop duo" Hutch and Kathy, and she's also from All Girl Summer Fun Band.}

The infectious Ben Barnett {Kind of Like Spitting} on guitar, and the fetching Jordan Hudson {also of Operacycle fame} on drums infuse the songs with the power of a barely-legal addictive substance (God, I love his use of the high hat).

The Thermals have united the traditionally battling East and West coasts in harmony. Combining the smartest parts of the recent New York retro revolution with the infectious evergreen Berkley punk chronicles, they've taken created an sum that is far greater than its parts.

Like a breathtaking first date, I just didn't want them to stop. Their live performance made me so happy I wanted to run naked and tongue kiss every single one of them to express my unadulterated adoration. Even the girl — maybe especially the girl.

I just wanted to eat their heads. I have a huge rockstar crush on them. On all of them.

The Thermals don't need drugs to have a good time!
For some reason igLiz was on this no-drinking dare this week. But during the Thermals live show, she broke her six-day sobriety streak. And I swear that I had nothing to do with it. I swear.

It's just that… there's nothing sober about the Thermals — nothing! — and damnit if any imaginary girl would allow there to be!

The next time the Thermals come to town, we plan on plying them with alcohol or caffeine or whatever it takes to make them happy so they keep making more music and coming back and playing it for us.

They are the Thermals!
My prediction is that from here on out the names igDana and igLiz are going to be synonymous with the Thermals… well, because from now on we plan on seeing all of their shows and writing about them as much as possible because we love them so much….

Well, either for that, or the restraining order…