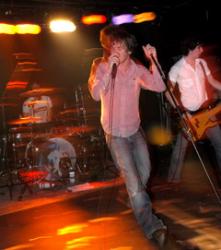 For months I had this date ingrained in my head. Friday, March 28th: "Imaginary Girls Gone Idlewild Weekend."

I couldn't have asked for more. Roddy and the boys hit every possible point of this lovely town, making a most perfect Imaginary Girls Gone Idlewild Weekend: an in-studio performance at my favorite radio station {like I need to tell you it's KEXP} in the afternoon, an in-store at my favorite Sonic Boom Record Store {Capitol Hill on 15th Ave.} in the early evening, and then a headlining show at one of my favorite venues {Graceland} at night. Could life have gotten any better? Um, yea… they were scheduled to play in Portland the following day… on a Saturday, at that! Hurray for rock-n-roll-tax-free-style AND no nasty 3a.m.-drive -back -to- Seattle- after- the- show- to- get- back- in- time- for- the- dayjob- the- next- morning.

The Idlewild Gods had truly smiled down upon me.

That said… know that I have taken several handfuls of sedatives to belt out the following paragraphs reviewing the show{s}. In addition, igDana is here to keep an eye on me and make sure I don't overuse exclamation marks, the word "awesome," or drive off in my car to catch the next stop on their US tour. If at any time you think I'm exaggerating the splendor of their performance, then look to the right of this page at the pictures that Mr. Ryan Schierling has provided us from the Seattle performances. *sigh*

Liz has had a copy of Idlewild's latest album, The Remote Part, since it was released in the UK last July, when she heard them play at the T in the Park festival, and she has made it her personal quest to instill me with a love for this Scottish band ever since. Mind you, it wasn't like it took much — one listen-through to those crashing swirling guitars and I was full-on enamored. But while my heart sings with love for this band, it nowhere near approaches "Liz" on the Idlewild-superfan-dom scale.

And she's played it for me at least 4,209 times since then — not that I'm complaining — and has become one of those albums I know by heart even though I don't own it.

As NME said, The Remote Part is nearly flawless. It's an immaculate, beautifully produced album, with both latent and blatant lyrical and musical hooks. In so many words, it is the album that REM should have released… well, anytime since Document. It *is* nearly flawless… a natural evolution from their last brilliantly sophmoric album, 100 Broken Windows.

Sooo… back to Girls Gone Idlewild. The first stop of the day went well. Their in-studio performance at KEXP sounded great, and I am sure we all learned at least one new interesting Idlewild tidbit from their interview portion.

Their in-store at Sonic Boom records was tasty, cozy and intimate, an excellent après-workday show to prime us for the evening… (and *yes* I was so there so don't even think for a minute that I missed that show, no sirree).

And by the time we were at the final Imaginary Girls Gone Idlewild Weekend stop of the day, the full imaginary posse had amassed and the excitement level among us reached feverpitch.

Once the two opening acts cleared the stage {the Natural History and the French Kicks} I found my Idlewild spot — one with a clear view of Roddy and a clear shot to the bar.

Whilst I, for purely documentarian purposes, secured a place front… center… in that front part… um, center.

Why, yes, I'm glad you mentioned that, igDana! That song is from their one of their earliest releases, the Captain mini-album… a song called, "You just have to be who you are". When I heard the opening notes to this, I immediately thanked the Idlewild Gods again. Thank you{!} for giving me a wee taste of what Idlewild sounded like in the early days! My thanks to the IGs {is it a strange coincidence that "Idlewild Gods" and "Imaginary Girls" share the same initials?} didn't end there. The rest of the set was just as worthy of tears.

My documentarian count of the set list shows that 43.75% of the set was songs from their latest album… which, if your Texas Instruments® is up and running {point that power strip at the top towards the window}, means that equates to 56.25% in catalog songs. I am sure that someone out there besides me and my Texas Instruments® is interested in knowing the breakdown of how each album was represented: 6.25% {Captain}/ 18.75% {Hope is Important}/ 31.25% {100 broken windows}/ 43.75% {The Remote Part}.

You're right… so here is a less mathematical breakdown of the set list… you know, in case you are wondering which songs they played from 100 broken windows, or if you wanted to make a compilation CD using the set list as a track listing, or… er, something:

I can't even begin to name which was my favorite part… Dana?

Before the show, I knew the songs from their latest album only… so I can't really quote by song names. But the whole show was brilliant. Their performances positively soared with confidence. They made me feel like I was falling, but gently, without fear of crashing or injury — a sensation like free-falling into billowy pillows of layered guitar and gorgeous melodies and Scottish accents.

I was so moved I bought the last two copies of The Remote Part that they had at their merch table (not to hoard them, but to share them with a friend, silly!). Now I kick myself for not procuring one of every t-shirt design. I should have supported my local poet.

Yay! I've got my own little Idlewild Superfan Protégé. This helps me feel more secure in my Idlewild merch table spending spree:

I think the most weak-in-the-knees part of the show was the evening's rendition of "American English" – when the line, "And you came along and found the weak spot, but you’ve always wanted" was ultra-intensified with the harmoniously climaxing instrumentation blaring out from the monitors… or, wait! Was the best moment when they played, "When I argue I see shapes" and guitarist Rod Jones chimed in with a set of ferociously urgent "SHAPES!!" screams…? Who knew they could have pulled that off live?

Oh… and can you believe that they ended the set with "Roseability"!!! I was left sweaty and spent. Regardless of the most heavenly moment, the climatic final song "in remote part/scottish fiction" was the therapeutic cool-down song I needed to prevent cramping. They even used the album's sample of the old guy reading that Scottish Fiction poem as their exit stage right soundtrack. I left completely exhilarated and found myself stumbling to the car {with merch firmly in hand}, head swirling from over-stimulation and randomly singing verses between statements of glee… ok, so I'd had a couple drinks during the course of the evening.

At the end of the show, I raced through the cold night, tearing at the plastic CD wrap in frustration (why must it be so inpenetrable?) in order to crank the CD in the car for the ride home up the Hill. I can't remember the last time a band left me so satiated, yet wanting to hear so much more…

A good night sleep, a three-hour drive, and a Powell's shopping spree later, we {fellow Idlewild connoisseurs Kelly and Davis made the journey with me} found ourselves blissfully in Lola's Room at the Crystal Ballroom in Portland.

The setlist remained the same, as did the spastically-jagged guitar player's moves, the merch selection and the lead singer's intoxicating swagger. As Kelly eloquently described it, "I love the way Roddy looks out into the crowd while he's singing. He has an unafraid stare out into the crowd… like he's trying to connect with each member of the audience. Rather than just staring blankly, it's like he has something to say to *you.*"

With the only noticeable changes being with the venue's chastising-bartenders, the un-cha-cha'd Portland audience and the better mixed sound system… on and don't even get me started on how scary it was that we were surrounded by thousands of frighteningly enthusiastic Super Diamond fans {SD was performing on the Crystal Ballroom's main stage}.

Is it hard to believe our little Idlewild boys are hitting the road with The Pearl Jam on that stadium tour thing this Spring/Summer? A wee bit… a wee bit not. With all that songwriting talent and live unadulterated energy, they deserve every bit of America's attention as they're able to get. But will those shows ever top the Imaginary Girls Gone Idlewild Weekend performances, or their set at T in the Park?

Don't get me started.