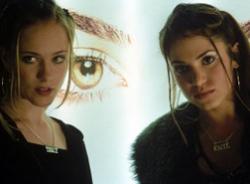 Thirteen, The Other Side of the Bed, Cabin Fever

imaginary embracey May 1, 2003 no Comments

San Fernando Valley teenager Nikki Reed co-wrote and co-stars in this gritty and unnerving film based upon her own experiences as a seventh grader. Tracy (Evan Rachel Wood) is a seemingly well-adjusted 13-year-old (big into poetry and stuffed animals and tween-geekiness) who yearns for larger status: she idolizes the sassy class hoochie-momma, Evie (Reed herself, playing the role to glam-grrl perfection). Almost overnight, Tracy revamps her look (out with the pom-pom sockies, in with a tongue ring) and cultivates Evie’s ultra-cool good graces. The two act out, steal shit, canoodle with older boys, and get on the drugs. Oh, these kids today.

Meanwhile, Tracy’s brother is freaking out about sis’ newfound liberation, and their single momma (Holly Hunter in a wonderful performance) is dealing with a co-dependent cokehead boyfriend (Six Feet Under‘s Jeremy Sisto) while herself trying to keep to the Twelve Steps! It’s no wonder that she gets so infuriated toward the end that she goes apeshit and yanks up the rotting kitchen floor linoleum.

First-time director and co-writer Catherine Hardwicke (previously a production designer on Laurel Canyon, Vanilla Sky, and Three Kings, to name a few) makes an impressive debut, and Wood couldn’t be better — her transformation from awkward wallflower to fierce ne’er-do-well is brilliant. And very, very sad.

With parallels to Kids and The Virgin Suicides, but with a coarse and naturalistic style all its own, Thirteen is a harrowing glimpse at one family’s downward spiral.

You know how sometimes you watch a bad sitcom just because it’s on? And you know how you roll your eyes at the idiot characters’ ridiculous hijinks and wonder how the hell folk in the heartland derive entertainment from such lowbrow bullshit? And you know how you just don’t stop watching and once in a while you even catch yourself … oh dear God … laughing?

OK, even if you don’t relate to this scenario (no hate mail from Everybody Loves Raymond fans, please), know that this is the feeling I had watching The Other Side of the Bed. It was a huge blockbuster in its native Spain, with its rollicking story of two hetero couples who cheat on each other, with each other (but only in a hetero way, mind you), lie to one another and connive to keep their ridiculous doings on the down-low. And, once in a while, they break into song. Oh yes, darlings, this is a musical!

And not a particularly good one. The songs sound Deborah Gibsonish at best (sorry, Debbie G), and some of the actors obviously have little or no vocal talent or training. But ya know something? It’s never all that painful, and it’s actually occasionally fun to watch. You might get a kick outta seeing lovely Paz Vega (from Talk to Her and Sex and Lucia), or especially María Esteve (from a bunch of Spanish films and TV shows I’ve never heard of, but she gets special billing in the end credits) — the one truly funny piece of this asinine jigsaw.

This is the first in the inaugural four-film Sundance Film Series, running through November at select Loews cinemas across the nation. (I reviewed the gripping In This World {9/19} during SIFF, and Die Mommie Die! {10/31} is a surefire camp classic; it’ll be opening the Seattle Lesbian and Gay Film Festival in October.) This Sundance series is definitely worth a gander, even though it’s underwritten by the likes of Volkswagen® and Kenneth Cole®. And even though its premiere offering is unsophisticated and sitcommy. (But dammit if I didn’t leave the theatre lighthearted, with the film’s doo-wah finale number happily bouncing about my brain.)

The best way I can describe this rancid bloodbucket of a movie is thusly: Friday the 13th meets Deliverance, via the ass of an extra-homophobic Dawson’s Creek character 28 Days Later.

It’s the day after finals and five college students decide to spend part of their summer vacation at a cabin deep in the North Carolina mountains. (The first of many, many mistakes.) After some good ol’ fuckin’ and drinkin’ and squirrel-huntin’ (no joke), one of them contracts a highly-contagious flesh-eating virus; the rest have to find help before they’re done in by the deadly bug, or by the local redneck lynch mob out to destroy anyone who may be spreading it.

First-time director Eli Roth is a protégé of David Lynch, and it shows in the innovative dream sequences and flashback visuals on display here. But while Roth manages to create a mood of dread and claustrophobia and doom, Cabin Fever is mostly just an exercise in squeam-rendering disgust. What the virus does to its victims calls for some truly grotesque FX work; if the filmmakers had put as much effort into dialogue and casting, this thing might have gone somewhere.

There is one very good scene, scored by composer Angelo Badalamenti (whose music appears regularly in Lynch’s work) and featuring Giuseppe Andrews in a brilliant bit role. Andrews’ Deputy Winston, a droll and borderline-psycho revelry fiend and the most interesting character in the movie, comes to the cabin at one point to investigate a disturbance. He chats with one of the college kids about partyin’ and sex (the phrase “five pounds of danglin’ meat” is uttered), looking deranged but somehow lovable against Badalamenti’s xylophone-tinged dreamscape. This brief interaction is like an outtake from Twin Peaks, and it made me so happy that I almost want to recommend the movie based solely on that scene.