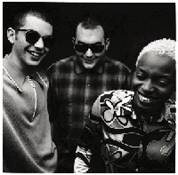 Morcheeba first came to me at a lame Little Rock potluck dinner party in summer 1998. Somehow the pretentious, borderline-moron host (who hadn't exercised the good sense to stock up on beverages of any kind — and for this and many other things I will never forgive him) had come across a deliciously layered chill-electro powerhouse, a cozy and vibrant triphop soundscape that warmed my prickly heart.

As it turns out, that album was the gorgeously downtempo masterpiece Big Calm. As I noshed hummus and sipped tap water from a chipped coffee mug (that's right — no clean glasses or even Dixie cups at this shindig) the dreamy vocals of Skye Edwards brought me a little peace. I even managed to say something nice to the otherwise unadmirable host as the party ended and I headed to a record shop down the street.

I had soon procured the band's lovely 1996 debut release Who Can You Trust?, its trippy ambience more quietly captivating. Then 2000 brought the misguided Fragments of Freedom, a somewhat disillusioning exercise that replaced the first two albums' groove and languorous soulfulness with occasional bright glimpses in a sea of wannabe-rap, faux-gospel and R&B-lite.

I blamed it on that party host from two years before. Somehow he was responsible.

But last summer when I began hearing the charming single "Otherwise" on KEXP, my hope in Morcheeba was restored. Soon came the new full-length Charango, a beautiful hodgepodge of everything the band had given us before — wistfully convoluted vibes, tranquil rhythms, and (this time) well-integrated hiphop influences. A glorious return to form. So I was excited to see them live at the Moore.

Skye and the 5-piece band began with two Big Calm numbers, "The Sea" and "Friction". It wasn't long until my opera glasses (read: mini binoculars) were completely fogged by my heavy-breathing companion for the evening, who asks to be identified only as Invisible Telle.

"I love her," purred IT, drawn (as, I admit, was I) by Skye's all-but-otherworldly stage presence. Wearing a simple glittery black dress that presented taut, toned arms and a remarkably statuesque figure (incredible for such a small woman), she swayed and grooved delicately and sublimely, like the ethereal figure she most certainly is.

"Beautiful. But married," continued IT, jiggling her left-hand ring finger. "This makes me want to cry."

I personally remained dry-eyed, but could relate.

Next up was an extra-gritty version of the early tune "Tape Loop", followed by an exquisite rendition of "Otherwise". An amazing beginning to an amazing set — a skillful combination of old and new.

After an incredible 1.5-hour set (and the longest pre-encore applause I've ever endured as an audience member) Pace Won returned briefly but energetically to perform his solo Charango title track. Soon Skye took center stage again, ever casting her mystifying spell, winding down with "Undress Me Now" (IT would have gladly obliged) and ending with the crowd-pleasing inspirational "Rome Wasn't Built in a Day."

I left the cramped Moore balcony with a sense of peace and elation and thought back to that fateful dinner party. The Morcheeba magic was almost enough to make me reconsider my nearly-five-year-old grudge and pardon the Host with the Least.