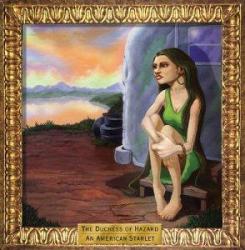 Back in the 80's there was a definite separation between rock and country. An American Starlet seamlessly blends these two genres together and creates songs enjoyed by hipsters, country folk and everyone in between. An American Starlet was formed (under the original name, Starlet) by Ian Parks in San Francisco. He later moved to Seattle and reconstructed the band.

The Tractor Tavern created a perfect backdrop for this band. With the exception of Liz (the female vocalist) and the organ player, all band members were seated during the performance. Frontman and multi-instrumentalist, Ian Parks, also treats his voice as a multi-faceted instrument. Every waver and harmony was sweetly inserted with acute sensitivity. The extravagantly lush harmonies and the pain-filled lyrics triggered me to buy Ian a shot of Wild Turkey, pat him on the back and reassure him that everything was going to be okay; but I was too mesmerized by his dramatic, slow thrashing. I haven't seen seated movement that uncontained since I had dinner at a pizza joint with an eight year old hopped up on Cadbury Eggs and Coca cola.

The years of experience and musical passion are apparent in every song. This combined group of people are not mere musicians, they are professionals. They aren't puking out cute little songs, they're creating masterpieces. So many instruments were incorporated into each song, yet the sound was surprisingly stripped down and simple; simply beautiful with a touch of sweet sorrow.

I've decided this band is going to be my new first date litmus test. I will nonchalantly insert this CD into my player while driving with a potential life long companion. If aforementioned date shows any variety of distain for the music, I will pull over, let date out of my car and move along to someone who appreciates a little heartbreaking country now and again.