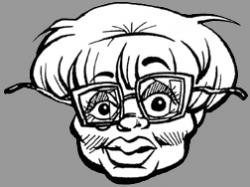 Christmastimes of my youth were spent at my Granny Earlene's house in Locust Grove, Arkansas. A three-hour drive from my childhood hometown took us to a different world — there were goats and chickens and horses and a pond, neighbors with big farm equipment and dusty John Deere baseball caps, and Granny's little roadside shop — Homestead Junk and Gift, right next door to her house on the Brock Mountain Highway.

A day or two after Christmas, Granny Earlene's three children (my dad being one) and their broods (my brother and I being some) would assemble at this rustic paradise to partake in familial fellowship, good country cookin', and some of the finest entertainment in northeast Arkansas.

You see, Granny was (and still is) a hoot. Much of her leisure time back then was spent listening — and talking — to an old police scanner. "That sumbitch sheriff don't know shit from Shinola," she'd cheerfully grouse, reaching past the armrest of her dusty pink La-Z-Boy to light another L&M cigarette. When the scan reception was bad we'd often hear, "One o' y'all young'uns make y'self useful and crank the squelch." (Television frustrated her — she noted regularly that she wouldn't give the piss off her hind end for any of the advertised products.)

Granny Earlene kept her holiday decorations simple. Oddly-placed strings of lights hung in a few windows, and an increasingly-tattered artificial tree bought at auction years before graced the living room. On the day of our departure (usually January 2nd or so) she'd put an enormous plastic garbage bag over the decorated tree — lights and tinsel and ornaments and all — and take it outside to a wooden shed behind the shop, where it would sit in storage until the following year.

It wasn't until I was older that I fully appreciated the quirky fun of holidays at Granny's. Over the years the holidays became increasingly jading; I never thought I'd recapture that nostalgia.

Then I was introduced to Carlotta Sue Philpott.

Carlotta's Late Night Wing Ding, and Carlotta herself, are the creations of drag performer Troy Mink, a Kentucky transplant who originated the character in a 1996 Seattle Fringe Festival production. Since 1997 the holiday Wing Ding — a gloriously offbeat revue of comedy, music, and improv — has been performed to packed houses at the Northwest Actors Studio.

I'd heard great things about the show, and decided to check out a late-run performance with none other than Imaginary Girl Liz. We had no idea what we were in for.

Carlotta greeted us warmly as we arrived (sweet drawl, polyester attire, and slightly-unkempt gray hair in full force), showed us to our seats, and politely moved on to welcome the next arrivals. Soon an odd, overalls-clad fellow brought around a plate of Chistmas cookies for us to enjoy. (The epitome of Southern hospitality, Carlotta makes certain her guests are comfortable and happy.) A few final preparations by the cast (each of whom remained completely in character, pre-opener through post-finale receiving line) and the show was set to begin.

Then Liz noticed something. "Do you smell that?" she demanded, situating her right palm mere centimeters from my face. Initially terrified, I calmed a bit when I recognized the heavy scent of WalMart-caliber coconut hand cream. Carlotta had shaken our hands when we entered. I was delighted at this stroke of olfactory authenticity, and taking in the stage decor (oddly strewn lights, fraying recliner, much-utilized afghans, familiar artificial tree) I felt seven years old again.

The show's cast and content change with every show. In this performance Carlotta's fellow Wing Dingers included her grandson Floyd (embittered and black-clad, "he never got over Halloween"), flamboyant Terry ("a behind-the-scenes sort of person"), Zeppelin-lovin' technical engineer Randy (his asthma forces him to "breathe through a special kind of glass pipe"), and her cookie-wielding, unpredictably wacked-out son Slaw ("named after his daddy's favorite salad"). Ian Duncan, Tom Ledcke, Patrick Giblin, and David Nixon were excellent in their roles, playing well off Carlotta's — and one another's — frequent spurts of comic genius. From the kooky whirlwind opening number ("It's a Hard-Knock Life") through the hysterically botched closing sing-a-long ("Auld Lang Syne"), their contributions were priceless.

Liz's favorite was Floyd Philpott, the youngest, leanest, most boyishly lovely of the bunch. I could barely hear his spoken lines with all the heavy panting going on next to me.

{editor's note: I beg your pardon? I don't think I was the only one, embracey! -igLiz}

Whatever — at least I kept my cool about it. I thought I was going to have to turn the hose on you.

{Well excuse me, but don't I recall you going on and on about how lovely his elongated vowels were? -igLiz}

Oh. Yes, I suppose that was me.

{And I don't think I was the one who had to adjust in their seat when Floyd stretched his body during that one number and his treasure trail showed for a second. -igLiz}

You've got me there. And I did nearly faint when I met him in the exit line after the show. But I digress. As much as Liz would have enjoyed Floyd's Late Night Wing Ding, this was Carlotta's hour. She was — and is — a force to be reckoned with. I laughed harder than I had in ages at some of her uproariously on-the-spot one-liners. At one point she received a gift of See's Old Time Chocolates and warbled, "It says Seeses old time, so that means they must be stale." When she offered one to a guest later in the show she warned, "Now they're cream centers so don't punch through any ub'm."

I lost it completely when she mentioned fried-bologna sandwiches and Vienna (pronounced "vy-eeny") sausages served with saltines. (I used to carry similar foodstuffs to Fields Elementary School every day in my metal Superfriends lunchbox.)

During the "Auld Lang Syne" sing-along, a disco ball that was meant to gradually descend from above the stage somehow fell loose and came dangerously close to landing on Carlotta's head. This nearly broke her up, but our hostess regained composure quickly and said, matter-of-factly, "Well New Year's sure came early this year."

I wonder if anyone without a Granny Earlene can possibly fathom just how side-splitting that is.

The show's holiday run has ended, but there's talk of a fresh batch of Wing Dings being mounted as soon as late January, with a possible dinner-theatre murder-mystery musical (!) later in 2003. By then, I'm almost certain, Carlotta's tree will be safely sheathed in plastic, stored for the year, awaiting its Christmastime return to the magnificent Philpott fantasyland.