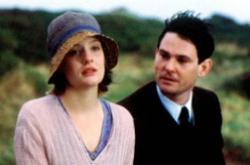 I Capture the Castle

In a minute I'll get to gushin' about this beautiful, enchanting film, because I'm chompin' at the bit to heap limitless praise upon it… so I'll just get the minor criticisms out of the way first. There are a few plot obscurities — it's adapted from a lengthy Dodie Smith novel, and at times essential details seem skimmed over or too-quickly executed. (Consequently, the presentation of the literary world at the time seems a bit thin.) And there are a couple of supporting performances that occasionally go just a little too far over-the-top for comfort.

Now forget what you just read, because I was utterly, hopelessly captivated by I Capture the Castle. I'm telling you I lost myself completely in its sumptuously-presented domain of a young writer who feels compelled to bear the weight of an imperfect world on her shoulders. The film she inhabits isn't a perfect one either, but that may just be the reason I have more pure affection for this gem than for any other offering at SIFF 2003.

The story begins with a gorgeously-shot flashback scene of a family driving down a sunny country road in 1920s England. In the first of many voiceover dialogues from her diary, Cassandra Mortmain (Romola Garai) explains that her famous father James (Bill Nighy), a newly-published first-time novelist, is moving her mother, younger brother, and older sister Rose to a remote Sussex castle; he hopes the new digs will inspire him to continue his winning streak as an author. The family in the motorcar is handsome and contented; these are halcyon days for the Mortmains, and their very existence seems faultless and charmed. "It is a golden memory," Cassandra wistfully declares, "and I am suspicious of it."

Cut to twelve years later, when the nitty-gritty of the story takes place, and we understand her distrust. The gorgeous castle has dilapidated into a rat-infested sinkhole, the kids' long-dead mother has been replaced with a freakshow bohemian stepmomma named Topaz (Tara Fitzgerald), Rose (Rose Byrne) has taken to bellyaching incessantly about the family's wretched state, and, worst of all, James' creative well has run dry — he hasn't written a thing this entire time. Publication royalties are kaput. Months' worth of back rent is due.

Enter the wealthy Cottons (E.T.'s Henry Thomas and Buffy's Marc Blucas), strapping American brothers and rightful owners of the paltry property. They'll eventually become friends of the troubled clan, then unwittingly get Rose and Cassandra all stirred up with feelings of love, lust, and a desire to escape their financial dilemma.

Speaking of strapping boys, let's not forget the sweet and beautiful servant Stephen (Henry Cavill), so devoted to the Mortmains that he's been working for years without pay. And speaking of getting stirred up, he sure had me all hot and bothered. At one point Topaz states that he "looks like all the Greek gods rolled into one." I couldn't agree more. One understands why Cassandra gets rosy-cheeked and flustered whenever he's around.

But that's the only hint I'll give as to what transpires. The myriad twists and turns of who falls for whom, who likes whom in only a companionly way, who is heartbroken as a result, and who gets butt-nekkid are too wonderful for me to ruin with a minimal play-by-play. Just know that this aspect of the film makes for an irresistably charming love story, enriched with Cassandra's elaborate fantasies, diary entries, and ongoing self-analysis.

Yet there's something darker looming beneath it all — and when emotionally-crippled James finally deals with his creative block (not to mention the secret tragedy of his wife's death), it's really Cassandra's doing. But, then again, what isn't? Many wrongs are left up to this smart and unassuming girl to make right, and if she weren't around her realm would go to hell in a handbasket. Big burden, and I simply can't imagine a better Cassandra than Romola Garai, who walks the fine coming-of-age line impeccably.

By the way, author Dodie Smith is best known for her novel The Hundred and One Dalmatians. And another interesting tidbit: I Capture the Castle nearly became a Hollywood movie before Smith had completed it. In 1943 the first three chapters were shown to MGM, which was interested in filming it if she would dictate the rest of the plot to a secretary. She declined and put the unfinished book aside for a couple of years; it wasn't published until 1948. Why this rich material took so long to get on the screen is a mystery, but now we have a modestly budgeted BBC version that works just fine, thank you. And it's in good hands with first-time feature director Tim Fywell, who does a magnificent job of showing us Cassandra's inmost heart.

And when he gets us to the last page of her diary, and the last shot of the movie, I Capture the Castle reaches absolute, bittersweet perfection. Cassandra scribbles only eight little words, of just one syllable each. And what she says means everything.