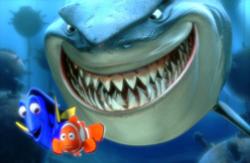 I'm a sucker for Pixar movies, despite the unnecessary Disney cheese that invariably accompanies them. Toy Story II (which included an eye-roller of a Sarah McLachlan song) and Monsters Inc. (even with that cheat of a happy ending) are my favorites. They embody everything good about the big-budget CGI-animation genre: strong characters you believe in, even knowing they're essentially an Atari game with celebrity voices; interesting stories that relay good messages to the kiddies about loyalty, kindness, and individuality; and, of course, those gorgeous visuals.

Now comes Finding Nemo, a dazzling underwater adventure that, for me, is right up there with those other two flicks. It's the most realistic, technologically-accomplished film in Pixar's cache to date, it's funny and well-written, and the characters are (for the most part) beautifully rendered. But what makes me truly love this movie is all the subversive shit going on — here we have a Disney movie that tells us organized labor is good and corporate drones are bad! Believe it.

The film begins with a dark expository scene of Nemo's parents (they're clownfish — but don't automatically assume they're amusing, please) settling into their nice new home on the Great Barrier Reef, only to be disrupted by the violent death of Nemo's mother and (hundreds of) unborn siblings. It's made clear that Nemo (a special needs child … err, fish) has been sheltered by his anxious dad Marlin (hilariously, nebbishly read by Albert Brooks) from the get-go, and when the young'un goes missing on his first day of school, Marlin vows to stop at nothing to bring him home safely.

Marlin meets schizophrenic blue tangfish Dory (Ellen Degeneres), a majorly freaky-pop spacecase with abandonment issues and selective short-term memory loss. This finned freakshow can't remember names or faces (do fish have "faces"?) from one moment to the next, but she can read English (!) and recall on demand a crucial street address (!) in Sydney, Australia. It's Ellen's best performance in years — and oh how I want to believe she used Anne Heche's kook factor for inspiration.

The Dory-Marlin odd coupling makes for sublime comedy, and during their wacky adventure-filled search for Nemo they happen upon some astonishing setpieces: a shapeshifting school of John Ratzenberger-voiced show-and-tell moonfish, a surfer-dude turtle named Crush (his creepy offspring are like disturbing remnants of A Bug's Life), and a cloud of deceivingly magnificent jellyfish (which the pair must navigate for the sake of their lives).

Meanwhile, lil' Nemo and an odd assemblage of marine creatures are trapped inside a Sydney dentist's office aquarium, ever scheming to subvert authority by uniting against their oppressor. The dentist, you see, is planning to give Nemo as a gift to his metalmouthed, fish-killer of a niece named Darla, whose deliciously terrifying photo (looming next to the tank as a constant horrible reminder) looks like an extra-deranged Garbage Pail Kid trading card. Willem Dafoe voices Gill, the scarred leader of the pack, whose ludicrous plans for escape eventually teach Nemo how to rally, unionize, and be a good Marxist. (He even puts this knowledge to use later, himself directing a successful revolt.)

As Dory and Marlin draw closer to their goal, they encounter a flock of hungry gulls whose monotonous cry is eventually revealed to be layered utterances of the word "mine". The birds are always in groups and each is revealingly nondistinct — and, also like predatory corporate suits, they're constantly on the lookout for unique and beautiful things to devour.

Even with the groovy subconscious anti-capitalist cues (maybe they're there because Pixar is about to sever its ties to the Mouse House?), the more obvious morals of this story are good ones: calm down, relinquish control, and let your loved ones fuck up once in a while. Sometimes you have to be willing to descend into the belly of a whale to come out on top. There's no better lesson than one learned the hard way.