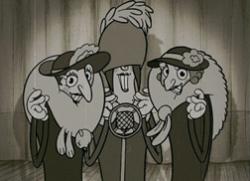 The Triplets of Belleville, The Cooler, Girl with a Pearl Earring

It's rare to witness an adult Seattle audience get really worked up over… well, anything, really. It's extremely uncommon for such an audience to clap and cheer and gasp and scream, get truly emotionally invested and just go plain apeshit over something like 2D-animated The Triplets of Belleville. But at a recent screening of this Europudding confection at the Egyptian, apeshit they did go, and it's not hard to see why. This is a darkly beguiling little flick, gloriously entertaining from start to finish, and one of my favorite films of 2003.

The story involves a melancholy young boy who grows to be a champion cyclist, living with his club-footed grandmomma somewhere in France. When the cyclist is kidnapped (by Gestapo-like square-shouldered mafioso types), Granny takes pursuit in an extraordinary journey that leads to the excessively huge American-esque city of Belleville, where the citizens are positively porcine. (Even the Statue of Liberty-like harbor statue is corpulent.) Three sprightly ex-Vaudevillians (the Triplets) take Granny in, feed her a variety of frog-based dishes, and assist her in rescuing her grandson.

The visuals (alluding to Jacques Tati, Betty Boop, and old-school Disney, with some seamlessly-integrated CGI thrown into the mix) inspire genuine awe. Quirky character details (Granny's trick eye, cyclists' tether-stretched little necks, a rodent-like engineer) enhance the virtually dialogue-free action and startlingly gamey quality of Delicatessen and (overlooked gem) Babe: Pig in the City. Like the latter, this is a kids' movie for adults… or maybe the other way 'round.

Either way, French comic-strip artist Sylvain Chomet's debut feature is marvelous, and I can't wait to see what he offers us next. Trust me (and that unusually ecstatic audience): The Triplets of Belleville is a masterpiece.

William H. Macy gives a fine performance as Bernie Lootz, a Vegas gambler with a special skill for losing: his mobster casino-manager pal Shelly (Alec Baldwin, in his best performance to date) hires him as a cooler, a "piece of walking Kryptonite" who can jinx the high rollers just by being near them. But when Bernie's luck changes (he falls in love with damaged-goods cocktail waitress Maria Bello), he starts to lose his knack.

For me, this film belongs to Baldwin as the old-school hard-liner up against Vegas' increasing Disneyfication. His grungy downtown casino (the fictional Shangri-La) is being threatened by business-school grads who want to modernize the joint in an effort to compete with Strip rivals; Shelly's character arc teaches us a lot about this fascinating closed society. When you see the movie, compare and contrast its opening and closing shots (swanky neon of gargantuan Strip casinos vs. demolition footage of their ill-fated predecessors): they allude to what The Cooler is really about.

This new adaptation of Tracy Chevalier's wonderful 2000 novel is like a glossier-than-normal Masterpiece Theatre offering: lovely to behold, but just not as good as its source material.

When lovely 17th-century servant girl Griet (Scarlett Johanson, wonderful in a mostly-silent role) goes to work at the home of Dutch master Johannes Vermeer (Colin Firth), she quickly catches the lurid glances of no less than three men: hermetic Vermeer, randy butcher boy Piet (hot Cillian Murphy, who you might remember from 28 Days Later), and evil arts-patron Van Ruijven (Tom Wilkinson). Griet's natural beauty (and the attention it gets her) seriously sticks in the craw of Vermeer's wife (Essie Davis). Mrs. Vermeer's staunch momma (Judy Parfitt) and bad-ass kids (one of whom breaks the little tile Griet's daddy painted before he went blind!) add to the misery. Yet Griet manages to rouse her master's chilly affections and to eventually become the subject of the now-famous painting.

Engaging story, good acting, run-of-the-(wind)mill screenplay. But my God it's pretty. Sweeping shots of the Delft countryside made me wanna cry. And every interior scene seems to evoke one of Vermeer's works, with their evocative placement of people and objects, their heartbreakingly delicate mastery of light.