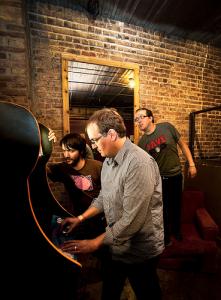 Interview with Matt Maginn of Cursive

After suggesting we go through Tim Kasher’s email in the basement of Neumo’s, we sat down with The Three Amigos playing on VHS in the background to talk about the new album, the tour, and nature of all things Cursive.

TIG: So how’s the tour going?

Matt Maginn: Good, it’s totally worth it to go to new towns that we’ve never played before like, Billings, Montana and Rapid City, South Dakota. It’s cool playing new places because you never know if people will show up. But they did and it’s been great.

TIG: How did you meet the drummer for this tour, Cully Symington, and the trumpet/keyboard player, Patrick Newberry?

Matt Maginn: We met Cully in 2006. He was playing with a band called Zykos down in Austin. Patrick we hired in 2006. He joined us for the Happy Hollow tour. We lucked out.

TIG: This is the first album you guys have put out without Cursive’s original drummer, Clint Schnase. How was writing songs with Cornbread Compton?

Matt Maginn: I love Cornbread and I love his drumming. But after spending that much creative time with Schnase it was odd. Cornbread worked with us for about two months as a hired drummer, which gave us a lot of time to work together and feel like, “Yeah, this will be alright. We can have another drummer.” But relationship-wise it was like not having your brother, you know?

TIG: Do you feel like it changed the sound and whole feel of the band?

Matt Maginn: That’s unavoidable when it’s the drummer. But I think Cornbread was conscious of not straying too far from what Schnase had been doing. We never told him to play like Cursive or Clint. We want people to come in and play the way they want too. He just went for it.

TIG: Another new thing: You guys generally work with Mike Mogis and on this album you worked with his brother.

Matt Maginn: Yeah A.J. We did that just to piss off Mike.

TIG: A little sibling rivalry going on there?

Matt Maginn: Ha, no, no. Over the years we always worked with both of them so it wasn’t weird to just work with A.J. Mike’s busy and we wanted to be more self-producing but work with a great engineer. A.J.’s been involved with us on almost every record. If I remember correctly he was more of the mixer and producer on The Storms of Early Summer. After that he was more of an engineer with us, except Domestica,—he and Mike were producers on that.

TIG: Why did you want to produce it yourselves?

Matt Maginn: On this album we were looking for more of an un-produced, live sound. It’s still all Cursive arrangements, but we got halfway to our raw goal. If we had had it the way it was in my head, we would have sounded crappy. I think it’s a reaction to the recording world right now. But I think it worked out well. Everything coming out just sounds so clear and so clean. At least our earlier records weren’t as perfect sounding. We wanted it to sound kind of screwed up. Because that’s part of the art. And we did that. Any screw up we left in there, unless it was painful. And I think we got there except we’re still using really nice microphones and all that stuff.

TIG: What do you think makes this album instrumentally distinct the way that the Cello of Ugly Organ or the horns on Happy Hollows made those albums unique?

Matt Maginn: Well I don’t know if everyone would agree on this, but when we were writing this stuff I felt like we were trying to get a more melancholy, slow sound. It reminded me of our first record a little bit because back then we went from seeing how fast we could play, to the point where we were ready to release the record and everything had been slowed down and layered and it was much more dark. That’s what I really like about “Going to Hell” and “What Have I Done.” Even “From The Hips.” Really there are only a few tracks on the album that aren’t like that. But that’s just my opinion. I don’t know if Tim and Ted would agree.

TIG: Well it’s definitely not as aggressive as your other material.

Matt Maginn: Yeah, it’s not like smashing you in the face. Now I feel like it would be fun to do something like that again, but you have to do something different every time.

TIG: You guys have such a strong identity, but you grow and add new elements every time.

Matt Maginn: On Ugly Organ we stopped trying to fit into a sound. We trusted that our writing and our playing, after that much time, would come through even if we were playing “Art Is Hard” or even a very linear song like “The Recluse.” And that’s how we approached Happy Hollow, too. We put in these new elements but we don’t want to sound like a different band, we just hoped that between the song writing and the lyrics and the way that each person played, our style would come through.

TIG: Writing the songs for this album you guys have mainly been playing them live and finalizing them that way, right?

Matt Maginn: Yeah, that’s always been the best for us. Standing up in front of people and being forced to not screw them up helps you a lot. This time we played every song live before recording it, even “Mama, I’m Swollen,” the last song on the album. But it’s hard when you play a song live that doesn’t make it on the album. It’s just hard to let a song go after spending a lot of time playing it live and not having any decent hard copy recordings of it. It makes you wonder if you should have worked harder on it.

TIG: Between the two albums you guys were very spread out, so coming together and playing these songs live, how did the dynamic change?

Matt Maginn: In Omaha we would practice once a week for three or four hours. When we were writing we’d get up to three or four times a week. But now that we live separately we’re able to be in the studio for 8 or 10 or 16 hours at a stretch. We were able to spend more time on every song. Then, to pay the airfare, we would play a show. That’s when we’d try out the new songs.

TIG: There is a strong connection between what happens musically and lyrically, and on this album it sounds like technologically, and that’s why I think your albums are referred to as concept albums. I’m wondering where that springs from.

Matt Maginn: Sometimes the structure is all set up, Tim and Ted are the core songwriters, so when we come together they usually bring the guitar structure and Tim usually has a lot of the vocal melody as well. But he really doesn’t write lyrics until after we’re done recording. He has done this for many so years—he just plays with words but he doesn’t write the song until he really knows what he wants it to sound like.

TIG: Anything else that you feel really makes this album special?

Matt Maginn: I’m happy that’s it’s different. I know a lot of people out there aren’t. I’m not sure what it is, if it’s the lack of aggression or what, but I think it’s good to have time creatively to work this way. I think we were able to give this album space.

TIG: You guys generally have a decent amount of time between releases. Do you ever have a plan to release more albums, or do you just let it go?

Matt Maginn: We never really know. Creatively it’s really good for us, but business-wise it’s a terrible plan. But it allows us to not feel forced to put out another Cursive album. It’s funny, we just sort of get a vibe or something happens and we just feel like we want to write a record. A lot of it is just figuring out what you want to accomplish.