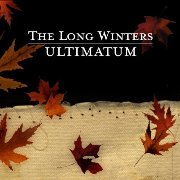 The Long Winters' long-awaited follow-up to 2003's critically-smothered full-length When I Pretend To Fall is just a handful of studio songs and two live glimpses of poet-picador-crooner John Roderick in elegant action. The mind-wrecking thing is that this EP has more character, wisdom, and emotion than box sets full of so-called classics by bands that sell scads beyond the 'indie rock mafia' Roderick is so ambivalent about.

Roderick loves history, and the way we're individually deconstructed by history (time coming apart) is all over the four studio songs that form the centerpiece for Ultimatum. The opening chiller about aircraft (spacecraft?) disaster, "The Commander Thinks Aloud," taps into the memory of songs like "Space Oddity" and Laurie Anderson's "From The Air." And like those ironically-detached, just-before-the-end anthems, you can feel the room filling with the dreaded sense of everything about to explode and cease. It makes a perfect prologue here, the shuffling-pounding drums and swelling strings of the earlier version absorbed by a slower and grittier band ambiance, which fits, as it's about unavoidable destruction, the kind of destruction our entire country seems determined to endure, despite conscious thought.

That's not the only weird, fucked up room Roderick leads us through. Third track "Everything Is Talking" seems written out of that post-Gurdjieff divine spin, when you realize how many of us are just food for the moon. Resisting mysticism, Roderick would no doubt bust my nut for making such a comparison, but sometimes reality is too paradoxical to endure ("Nameless friends/All know my name"). The strangely soulful music for this song is perfectly paced for his stuck-in-molasses vocals, trying to come to grips with the same destruction that seemed to plague David Byrne in the song "Air." The first line of the final verse, "My bank is hip-hop jazz," reminds me of Phil Dick's only perfect novel "Ubik," where commerce was poetry.

Speaking of air, in the sensual and shuffling "Delicate Hands," Roderick craves breathing, as the decay of time falls around him before he may connect with a potential lover. (It ends, "I want to feed you butter-rum candy, but someone beat you to me" Will there be a better autumnal indie-rock image this season?) If all of this seems overwhelmingly effete, bear in mind that Roderick sings like a dude who grew up on Marvin Gaye but happens to be white (our generation's Van Morrison?), and his robust wail never lacks confidence or charm, especially when delivering lines as sympathetic as, "You weren't true, but I can't blame a woman who changes" (from the throttling strum-and-storm epilogue, "Bride and Bridle").

Ultimatum sounds like a strange title for an EP that seems more like a focusing clarion call for what a possibly history-changing band has coming next. And yet that word makes sense, as the songs here are about things falling apart, and that really is the end, as much as the beginning.