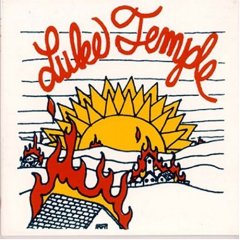 The water level over at Mill Pond has been steadily rising, spilling over, and causing no small amount of stir among the increasingly-homogenized locals. First breaking onto the scene with indie/classic-rock act Blessed Light, and now with the self-titled EP release from Californian-gone-New-York-and-come-Seattle-art-student Luke Temple, it is clear that Mike Manning, owner of Mill Pond and former SubPop intern, truly understands good music when he hears it.

What Temple brings to the table is a strong and clean folk-rock style that most fans of Jeff Buckley and Bob Dylan would identify with. But, you say, doesn't every dang folk-rocker this side of the Rockies lay claim to those two heavyweights? I mean, throw in a flippin' reference to the Beatles and Nick Drake and you've just described 90% of the acoustic-based releases in the past five years! So true. Let me restart…

Luke Temple could, if he wanted to, howl in a way to make Thom Yorke say "damn!" While at the same time, he could pluck out a lovely, gospel-driven traditional folk number likely to bring a tear to Woody Guthrie's eye — and that's precisely what he does on these short four appetizers. Alternating between the "folk" and the "rock," Temple shows us that he is as comfortable with an acoustic guitar in his lap as he is with a full backing band, and any number of his songs could become "hits" on a variety of radio formats.

With his perfect (and I do mean perfect) vocal pitch, and his crisp-linen songwriting, Luke explores his relationship with himself, others and his maker on this EP in a way that shows wisdom beyond his years. On "Make Right With You," Luke laments to us "When all of life's dragging me through/I've got to make right with you/Lord knows that I do," in such a timeless way that I actually had to take a peak in the linear notes to make sure that this wasn't a traditional cover.

I'd expect Luke's forthcoming full-length from Mill Pond, Hold a Match to a Gasoline World, to catapult him to local celebrity as well as national fame. And I wouldn't be a bit surprised to hear his crystalline voice on many a future movie soundtrack.

{Apparently Imaginary Bri isn't the only one digging Luke Temple's debut — the EP just placed #8 on the Top Northwest Releases of 2004 readers' poll. Check out all the results!}