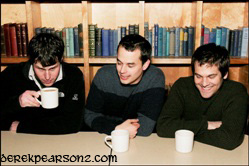 Three Imaginary Girls sat down with Gabe Archer, Greg Swinehart, Cameron Nicklaus, of the Pale Pacific {formerly known as the Pale, the fellows who blessed us with Gravity Gets Things Done} to talk about their name elongation, their new release {the EP Rules are Predictable}, Justin Timberlake, and coffee.

TIG: Hi fellas! How are you?

GABE: So good…and you?

GREG: I’m great, now that 50 Cent and The Game have come to a truce. I was worried.

TIG: Us too! Although that still doesn’t make up for a less than exciting new 50 Cent record… but let’s not get into that. How do you take your coffee, and what are your favorite coffee haunts, locally?

GREG: I like my coffee really, really thick… So thick that if you didn’t add cream, you might die. So far, (I’m always on the lookout) Café Appassionato has served me more perfect Americanos than the rest of the coffee places in town.

TIG: So you are the Pale Pacific now. Why did you have to change your name?

CAMERON: I’ll let Gabe field that one. He loves the drama.

GABE: I do love the drama. The short version: To avoid a copyright lawsuit. The medium version: Another band had the copyright — they bought it from a different band a few years ago — and it was creating some confusion. They were cool about it… they offered to sell us the copyright. But in the end it was easier to take a new name to avoid copyright troubles here and internationally, as there are a couple of bands in Europe called The Pale. So, we are now officially, the Pale Pacific. Tell your imaginary friends.

GREG: The other band was throwing a big show in their home town, but to promote it the Houston Chronicle did a story about us accidentally. Kind of lame for their hometown paper to do that to them, really. We got the Cease and Desist letter right after that, right before our five week summer tour. We obviously ignored it for the time being. Because that’s how we roll.

TIG: How did you settle on ‘The Pale Pacific’? What other names were in the running? What have reactions been like from your fans?

CAMERON: We thought about just ‘Pacific’ or ‘The Pacific’ and I liked those ideas, but we felt like this might help us maintain some name recognition. I’ve heard a couple people say they don’t see why anyone would start calling us by our full name. That’s pretty funny to me – we inadvertently found a loop-hole. Umm, I mean, ‘The Pale Pacific’ does not condone use of the name ‘The Pale’ in reference to our band etc. etc.

TIG: What are you doing with your ‘The Pale’ merch inventory?

CAMERON: Why? Are you guys interested? We’ll make you a sweet deal…

GREG: Actually, it’s all gone! I think there are a couple Gravity CD’s still in the warehouse, so they’ll probably have some sort of sticker on them for a little while. No big whoop.

TIG: Isn’t this the first fresh new recording that you’ve done with your new label? Did the recording process differ at all this time around?

CAMERON: Yeah, a little different. I engineered again, and we borrowed a house out on Orcas Island for 21 days. It was beautiful, and pretty distraction free. Gabe and I took up jogging. At the end or our time there we played a show. By then the entire island (all 274 residents) was what I refer to as “abuzz” with the news.

GABE: We self-released Gravity almost two and a half years ago, but the national rerelease on SideCho is just over a year old. We were feeling a burden to not make folks around here wait any longer than we could help. So we’re pretty darn excited to release the EP Rules Are Predictable now and the full-length Urgency this summer. At the end of our time on Orcas we had 15 songs to choose from and when we finished picking the song order for the two new albums Rules ended up being a satisfying bridge between Gravity and Urgency.

GREG: I loved that when we recorded Gravity in our practice space, virtually no one outside of Bellingham knew who we were. There was a certain amount of insulation there, as well as motivation that nothing would happen unless we recorded some really hot jams. That’s why Gravity turned out to be so hit oriented… Most every song stands pretty well on its own. This time, we wanted the same kind of insulation but we turned the focus toward the record as a whole, rather than the individual songs. I’m SO excited about the new corners our record goes to.

TIG: Why did you sign with SideCho? What did they offer that made them the best choice for you?

CAMERON: They just seemed more excited about our music than anyone else.

GABE: After we released Gravity Gets Things Done and things were going well locally the one missing piece was getting it distributed nationally. SideCho seemed liked the best step forward that we could take without things getting so big that they were out of our control.

TIG: You’ve surely experienced a lot since Gravity Gets Things Done. Have there been any specific experiences that have influenced the sound or direction of your latest release?

CAMERON: For me personally, as the number of people interested in what we are doing grows, my sense of responsibility toward those people grows. We’ve also had opportunities to play with amazing bands and that is very creatively inspiring. I love watching a band and thinking, “I wish I wrote that song”.

GABE: Lyrically, Gravity was a pretty personal record for me. With Rules and Urgency I was really looking forward to writing lyrics that I identified with but that weren’t so personal. My plan wasn’t much more specific than that, but the songs, for the most part, ended up being about a family and the things that unravel them.

GREG: I think the cabin we recorded in set a big tone. You can hear the house noises all over the album, like the wood burning stove to keep us warm or the dude making tea in the kitchen. I’m an enormous fan of Damien Jurado’s Ghost of David, so those house-like noises sounded more than perfect to me!

TIG: What are you listening to right now, locally and otherwise?

GABE: My list would include everything Cameron mentioned and I would add Beck [Guero] and the sequestered Fiona Apple record [Extraordinary Machine]. Locally, it’s The Catch, Dolour, The Divorce, The Charity Stripe, and Rocky Votolato.

GREG: I’m so excited about Seattle music right now. There’s the obvious ones… the USE/Wonderful/Catch crew. I love Aqueduct. But I’m especially excited about the sneaky new crew… Luke Temple, Wesafari, Racetrack, Mercir, among many others… They’re all about to take over, which is so rad. Portland is going crazy right now. Menomena, Derby, Tea For Julie… so, so good! Outside of the Northwest, I love the doves. I LOVE DOVES. And I’m ALWAYS ready to listen to Lionel Ritchie’s Back To Front. Anytime. You know where to find me.

TIG: What do you listen to in the van?

CAMERON: Greg’s i-pod or Greg’s computer. He always has the latest thing we NEED to hear. Oh yes, and we listen to Justin complain. Man, that guy is a whiner.

GABE: Yeah, that Justin is such a chatterbox.

GREG: We listen to a lot of comedy on the road. It breaks up the drives quite a bit.

TIG: Who’s the driver of the crew?

CAMERON: We share equally. We take turns alphabetically, but somehow still get confused about whose name should come next?

GABE: It’s sad how confused we are by that system.

GREG: We’ve threatened to do it by the Dewey decimal system, since the abc’s don’t seem to be working.

TIG: Speaking of driving around and touring, what are your tour plans upon release of the record?

CAMERON: We’re going cross-country in May and hopefully again in July or so.

GABE: For the tour in May we’re meeting up with Starflyer 59 for the east coast leg of the tour and we’re planning to meet up with our friends Careen [from Portland] for the west coast shows.

TIG: Of the four of you, who’s the Justin Timberlake? Who’s the Colin Farrell?

GABE: I don’t know about that. I think Colin Farrell and his ego would be more suited for a solo project. I think Justin is more like a Brad Pitt.

GREG: I do usually sing in falsetto.

TIG: Last question: TIG jokes that we’ll know we’ve “made it” when we’re mentioned in both NME and Jane magazines. What was the Pale’s criteria for “making it”? And now, what’s the same measure of success for the Pale Pacific?

CAMERON: Gabe has always said, “When I hear one of my song as muzak in an elevator I’ll know we’ve made it”. I hate this, but I think I associate our financial situation with our “success” (in this case we’re pretty unsuccessful). It felt validating to be reviewed in Rolling Stone and to get a mention in Spin.

GABE: Yeah… I don’t know about that one anymore. I might just be annoyed by us if a trombone and a flute were taking turns playing the vocal melodies of our songs. Although, I guess it still seems like it would be pretty cool to hear your song in an elevator. I think doing a couple national tours felt great. Now I can’t feel like we just stayed tucked away in our basement playing music for friends who would be there even if they didn’t like our music. I know this will sound super idealistic which runs the risk of sounding phony in an interview — but I think we’ve always fought to make records that were the best that we knew how to make them so that we’ve had the confidence to stand behind those songs. That feels like making it to me.

GREG: Getting our records in stores across the country was really big for me — that’s been my goal for us for so long. I also can’t believe we’re getting interviewed by the Imaginary Crew! You’ve been the best to everyone in the Seattle music scene!! We really can’t thank you enough.!!!!!

TIG: Awwee… thank YOU! You guys are nummier than a Top Pot double chocolate doughnut!