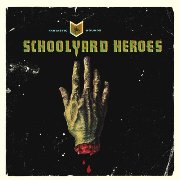 A sharp little machete from Seattle locals Schoolyard Heroes, Fantastic Wounds maintains the acrobatic inter-instrumental dynamics and savagely clever, at times genuinely affecting modern-life-as-horror-movie lyrics that defined their awesome debut, The Funeral Sciences. High points include the vamp-ish, tongue-in-cheek "Serial Killers Know How To Party," the foreboding death-disco-cum-math-rock of "Nightmare at 20,000 Feet" and the fuggin' epic "Panic In The Year Zero," the chorus of which will definitely inspire those of us old enough to remember such things to raise our fist and "run to the hills," if you catch my drift.

Throughout the disc, bassist Jonah Bergman and drummer Brian Turner seem positively skin grafted to one another, while guitarist Steve Bonnell unleashes roaring, ravenous leviathans, sneering, manic gremlins and everything in-between through his undoubtedly bloody fingers.

Lead singer Ryann Donnelly, meanwhile, unquestionably has one of the greatest voices in local music right now. Her sense of timing and vocal dynamics cuts through the music with the precision of a surgical scalpel, although this reviewer does slightly miss the more schizophrenic approach of her earlier stuff with the Heroes. While her chops are impeccable on Fantastic Wounds, one of the things that made their first album so endearing was Donnelly's mid-song leaps between sultry Exene Cervenka-style come-ons, Betty Boop on bathtub crank, stunning, soaring operatics, and truly terrifying wolf-woman howls. Here, however, there is a note of restraint in her vocals which, in some ways, fits the material better — but one hopes is simply a step in her evolution as a vocalist that will eventually combine that restraint with the unpredictability of her Funeral Sciences-era vocal persona. (It should also be noted that the vocal interplay with Bergman's bestial howls are also noticeably diminished on this album, but, again, this is an element that will hopefully come to a bad-ass middle ground as the band evolves.)

So, while Fantastic Wounds, like many sophomore releases, lacks a bit in the insouciant exuberance displayed by its predecessor, it is ultimately rewarding upon repeated listens and lays yet another brick (bits of brain and skull still clinging to it) in the solid foundation of this promising young band.