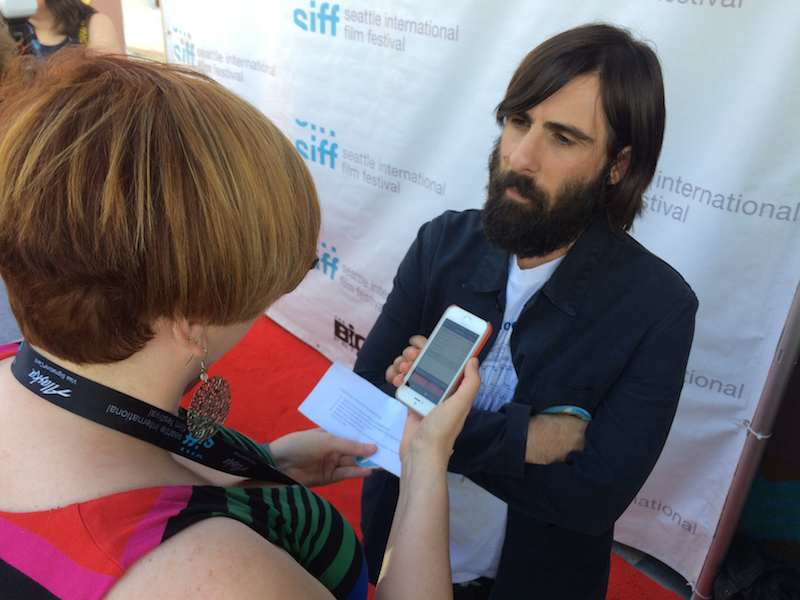 You guys! TIG got to be on the red carpet again Saturday night to interview Jason Schwartzman and Director Bob Byington for the Seattle International Film Festival premiere of 7 Chinese Brothers. I asked them both the same set of questions and got some very entertaining answers. If you missed this film at SIFF, don’t worry! It’s getting a wider release in August … and after you read this interview, you’ll know what kind of booze goes best with your theater soda.

TIG: What is Arrow’s [Schwartzman’s own dog, who stars in the movie alongside him] favorite thing to do besides sleep?

Bob Byington: {I asked Bob this question but prefaced it by saying he might not know else Arrow likes to do since he only saw him on set, and his response was:}Yeah, he likes to sleep.

Jason Schwartzman: Kiss you. {right here, imagine Liz & I both sighing and saying, “awwwwww!” in unison} Yeah. It’s true; he kind of attacks the face. If you get low enough, and you give him the angle, he’s gonna take it.

TIG: What type of alcohol would you carry around in a Big Gulp cup?

BB: That’s a great question. If you’re drinking like a Coke or a Diet Coke, your brown liquors go best with that, and then if you want to travel more incognito you put a little bit of vodka into club soda or a Sprite, and then you can kind of get away with it. You can deny there’s booze in the cup. But—if you’re gonna drink, you’re gonna go with Jack and coke and really commit to it.

JS: Well… is there ice in it? Maybe vodka? Or tequila.
TIG: Tequila seems like it would be … too much.
JS: Yeah, most likely vodka.

BB: The Freddy Mercury stuff is always gonna be the best. You can’t go wrong with that—people love like, “We Are the Champions” but it’s a cliché. You just have to go in for a full cliché bear hug. And being drunk certainly helps in that case, right?
TIG: Right. I have to be drunk to do any kind of singing on stage.
BB: Most people won’t do karaoke unless they’re drunk.

JS: I don’t really go out to karaoke very often, but if I had one …. can I just go with what I would do right now? These days?
TIG: Sure! Yes.
JS: “This Town Ain’t Big Enough for Both of Us” by Sparks.
TIG: Woooow. That’s …
JS: That would be hard, right? I feel like … just go for it.

TIG: What do you think Larry’s favorite band is? 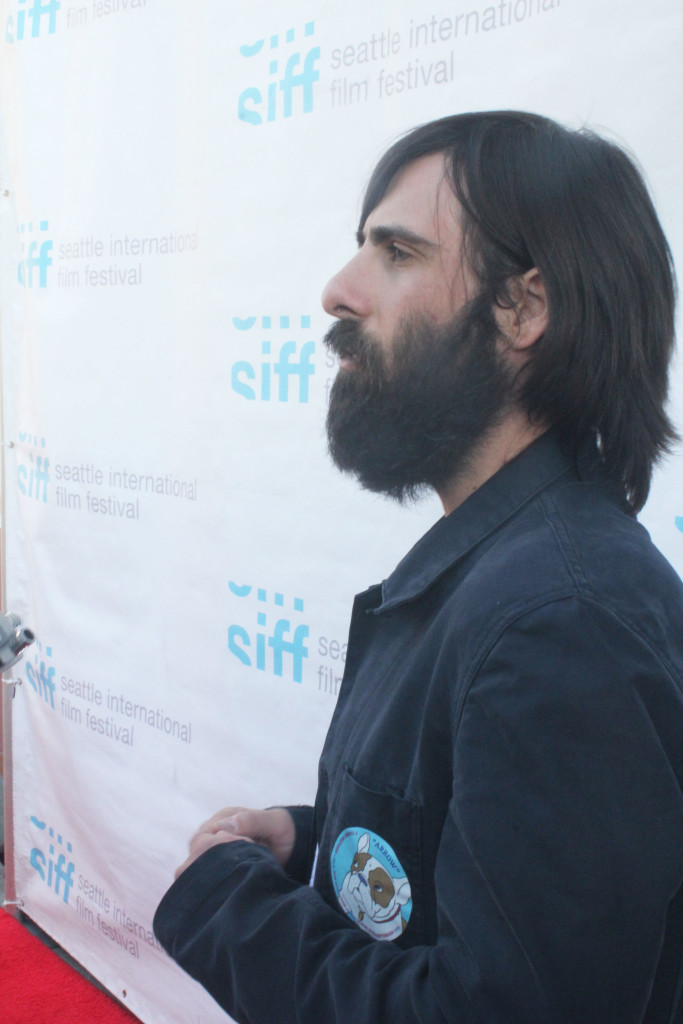 BB: I’m gonna go with Steely Dan.
TIG: Steely Dan? I was not expecting that.

JS: The Cars. Or Tom Petty? Maybe Tom Petty.
TIG: That’s a good mix!
JS: The only reason I say that is because we listened to this Tom Petty song a lot while we were shooting it, and none of that footage ended up in the movie—but almost any time I’m driving Bob would have me sing “Listen to Her Heart,” and so it’s part of the movie in my mind.

TIG: And, repeating the question that Larry’s grandmother asks in the movie, what do you intend to do with the rest of your life?

And … I snuck in a bonus question for Jason!

TIG: The only other thing I need to know is … I’m a HUGE Coconut Records fan! Are you going to do another album?

JS: Oh, cool. You know, I’m just trying to get enough songs together. Like, I have a lot of songs, but it’s a combination of getting the right ones and then finding another person to sit down and work with. Because I kind of need help.
TIG: And then maybe tour?
JS: I don’t know about touring … but maybe. Maybe? Never say never. I appreciate the interest. I just don’t know. 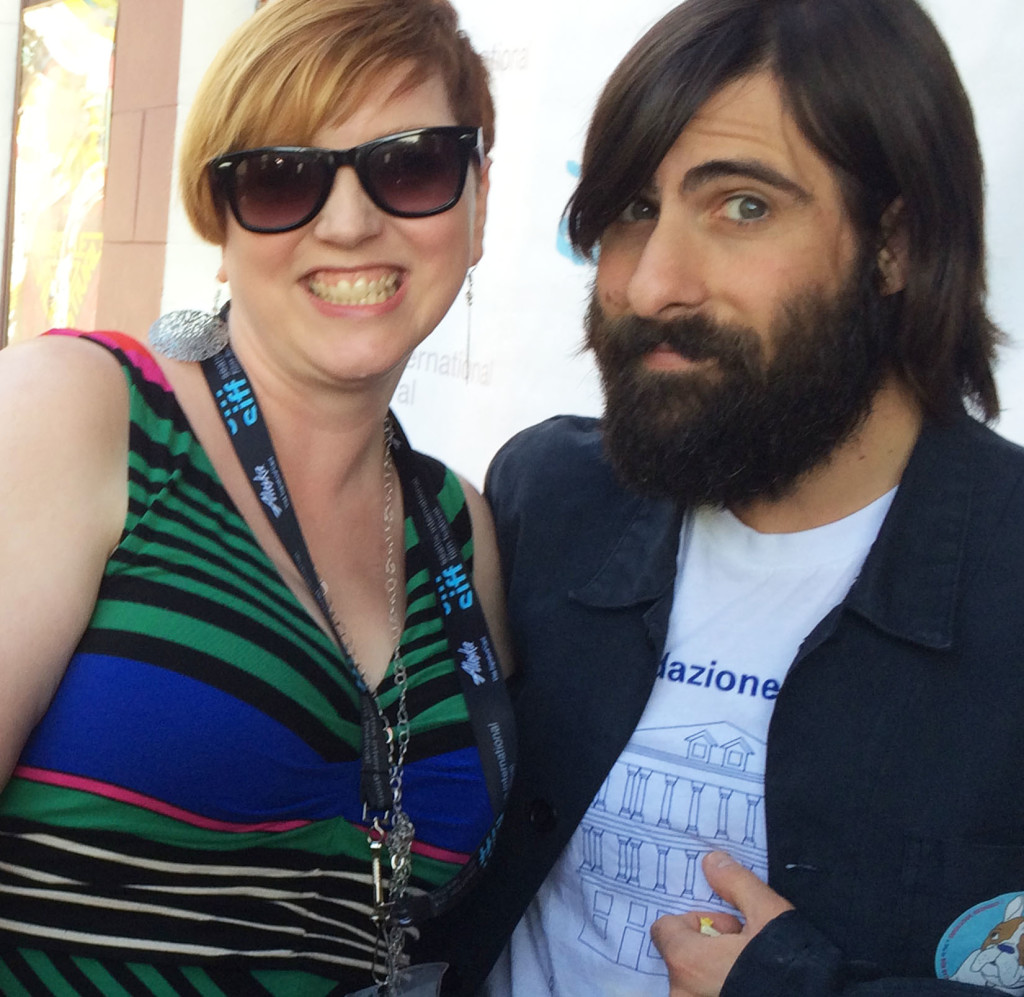