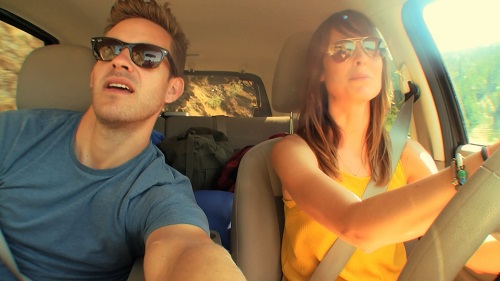 Holycrap, you guys. I was not expecting to get completely and totally sucked in by Willow Creek, especially because Director Bobcat Goldthwait has been calling it, “The Blair Squatch Project.” But 10 minutes in, I was ALL in, and even though the premise is ridiculously goofy, the film itself falls firmly in the horror genre.

The ridiculously goofy premise is this: Jim (Bryce Johnson) and his girlfriend Kelly (Alexie Gilmore) take a road trip to the site of the Patterson-Gimlin film footage in search of Bigfoot. It’s clear up front that Kelly isn’t a believer and that even though Jim might kinda-sorta want to believe, this is more about a fun birthday weekend for him that fulfills his childhood dream. Jim’s brought along a camera with plans to film the entire trip as a documentary of their findings, frequently turning it on himself and Kelly and interviewing local townspeople on the way to their end destination.

You’re set up right from the start to watch this as a comedy, because there’s no way freaking Bigfoot could be scary, right? As someone who viewed the 1977 film Sasquatch: The Legend of Bigfoot with high scare expectations that weren’t met, even as a kid, I was ready to dismiss Creek as yet another unsatisfying creature film. But that is most definitely NOT the case. Goldthwait wisely decided to have Jim interview a few real locals about Bigfoot sightings, which heightens the realistic feel of the film. And his handling of the scares is AMAZING; he never gives away too much—even with the couple finally makes the trek down into the trails and sets up camp for the night.

As a frequent viewer of found footage horror films, I find that most of them tend to have the same three problems:  1) It is so goddamn unrealistic that someone would just walk around with a video camera recording all day (I’m looking at you, Paranormal Activity—and all your sequels); 2) The main characters are so annoying you want them to die immediately; and 3) The footage in-between scares is so mind-numbingly boring that you’d rather fast-forward than actually watch.

I’m happy to say that Goldthwait did his homework for this one, providing a solid explanation for why the entire thing would be filmed, casting two actors who came across as normal, likeable people, and filling every minute with humor and hints at what’s to come while slowly building an incredible amount of suspense. I was literally leaning towards the screen during the last 20 minutes—one long, slow take of greatness—so I could fully take in everything that was happening.

I said this on Twitter after I watched it and after having time to reflect I still believe it: this is the best found footage film I’ve seen in a long time, since The Blair Witch Project … and honestly, maybe even better than that. I am really, really impressed.