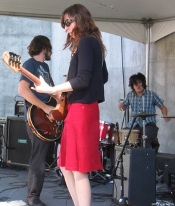 Around the last time Silversun Pickups were in Seattle, our staffer, La Imaginary Renata exchanged words with SSPU bass player Nikki Monninger. More than just a fan, La Imaginary Renata was able to get the inside scoop as she and Nikki were grammer school pals. Who would have known Seattle would be the locale for these two sweet and hottie SoCal ladies would meet catch up?

TIG: How did you all meet? I understand SSPUs started as kind of a joke?

SSPU: I met Brian (Aubert) on a plane to England around ten years ago. We met Joe (Lester) and Chris (Guanlao) about seven or eight years ago but it was a while before we started playing music together. Everything just kind of came together organically. I never thought of us as a joke, but I think it's cute that Brian does.

TIG: You've toured with some great musicians. Elliot Smith and Rilo Kiley and Autolux to name a few. Any good stories from the road?

SSPU: Hmmm. . .I can't think of any offhand. Autolux is one of my favorite local bands… and they are very sweet people. I used to have a crush on Eugene when I was in highschool.

TIG: How would you describe the sound of Silversun Pickups, for someone who hasn't heard one of your songs?

SSPU: Brian says something about us getting loud and quiet and ugly and pretty and I agree with him on that.

TIG: Are you surprised at your band's success?

SSPU: Hmmm… well, I still have my day job.

TIG: Where have audiences been most receptive to your music – outside of your home base, LA?

SSPU: So far, definately Seattle. . . KEXP has helped us out so much. we recently played at the crocodile and it felt like a homecoming, although it was the first time we had actually played there. We've also had some good shows in NYC.

TIG: What are you listening to these days? What's your favorite 2005 release (and you can't say Silversun Pickups)?

SSPU: Pretty much for the past month I've been listening to SSPU day in and day out… we're in the middle of recording… when I come home at night I enjoy the sounds of my space heater and of our cat Cauliflower snoring. I did have high hopes for the sun kil moon album of Modest Mouse covers, but unfortunately I was disappointed. What makes Modest Mouse great is that they work so well together as a band… and that's pretty much impossible to translate.

TIG: Thanks, Nikki! Oh and last question…when do you expect your full length album to come out?

SSPU: It depends when we are finished recording, but hopefully April 2006.