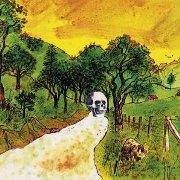 In this postmodern world we live in, the constructs of artistic critique can be complicated by the personal filters with which we interpret the works. Whereas I might hear a band and say "Palace Brothers/Music!", you might here the same band and think "deconstructed early R.E.M.!" and the music lover to our left might say "Camper Van Beethoven on depressants!"

Now, all of our descriptions might add an important component to the understanding of the musical encounter we have shared and the interpretative discontinuity of experience in our respective lives causes new elucidation upon the artistic message presented. Of course, the upshot of all this is that most music reviews are bollocks without context and if I had a grain of salt for every review I've read that blathered on and on about the relative importance of their opinion without taking into account that the reader might have no idea who Pop Abrams and the Smurfs are, I could probably do something about the pesky slug problem in Pacific Northwest… for good.

Where am I going with this? You know, I've sort of lost track, but no matter, for I am the king of this moment, and this moment tells me that I like the Skygreen Leopards, even if they are a Palace, early R.E.M., depressed David Lowery, post-folk indie collective. Take that musical establishment!

In some circles, "folk" is a dirty word that conjures up visions of dirty hippies, the Indigo Girls, vegan brownies and patchouli. I have to admit that I sometimes will be repelled like a vampire to the cross when I hear that the local venue is having a big "folk" show. However, like many things I wrongly believe, there are many types of music in the genre, and thanks to the likes of Will Oldham, Song:Ohia, Karate and other indie folk types, I've learned to appreciate the genre for its more nuanced and less, well, hokey aspects.

The Skygreen Leopards new album Disciples of California is one of those albums that disrupts my previous view of folk. It is a dark and dusty album that feels very loose and organic without sounding trite. The title track is rich with textured guitars and a jangly bass that drives the melody along. Tracks like "Places West of Shawnapee" and "Sally Orchid" capture more of an Iron & Wine/Calexico mood of late 1920's West Virginia, with languid guitars dripping over whisked drumbeats. Songs like "Jesus was Californian" has a rich, full sound with a dense mix of guitar, piano, bass and whatever else they could dig up around the studio. It is this loose and spontaneous aspect of the Skygreen Leopards that makes the album such a rich musical experience. One of the most haunting songs on Disciples of California is "Marching Band," where Glenn Donaldson's and Donovan Quinn's quivering vocals take on an After the Gold Rush-like Neil Young quality that blends into the echoing instruments. Turning back towards more the Palace somber folk, "William & the Sacred Hammer" plays the Oldham-like balladry quite effectively. Similarly, "Hollow Tree" is a tender song, with whispered vocals over slowly picked guitars before the rhythm section (the Skyband) come in to carry the album out into the night.

The Skygreen Leopards could be seen as the non-jam prone cousins of My Morning Jacket, blending aspects of the psychedelic tradition of their San Francisco home with the more Appalachian roots of folk music. It could be a little too laid-back for all the young whipper-snappers. They wonder how these archaic musical traditions mean anything to their modern lifestyle? However, their lack of an understanding of the context presented does not afford them the luxury of define new paradigms to benefit from these experiences. In other words: too freaking bad for them. Disciples of California is a refreshing breeze to go along with your whiskey and your postmodern porch while you enjoy the dwindling sunshine on these fall days.