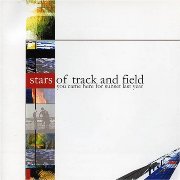 To paraphrase a famous song we all love, you float till you learn to swim. Produced by Tony Lash (Elliott Smith, Dandy Warhols) and Jeff Salzmann (Malkmus, Sunset Valley), Portland, Oregon's Stars Of Track And Field's debut is a five-song deep sea dive.

You Came Here For Sunset Last Year showcases Kevin Calaba's suave, stylishly anomalistic vocals, full of sweetness and perfectly paced to the melancholy minimalism of Daniel Orvik's beats, dancing between the flickering sheets of Jason Bell's lavish guitar. A dollop of sampling, a dribbling of piano here and there, helps to build atmosphere. Stars Of Track And Field's decision to trim down from a four-piece indie rock band to a more experimental yet sheer pop trio seems to have been exactly the right decision. The diversity of acts they've supported live, including The Long Winters, Village Green, Harvey Danger, and Carissa's Wierd — all quality bands but equally uncategorizable — show that they too are distinctive and can't be pigeonholed.

Despite being catchy and demanding repeated listens, the songs seem to be primarily concerned with the awkward persistence of maligned memory. While a sense of dystopian overflow reminds one of how Chris Ott described Joy Division as "the end of pop," it never gets too dark. Third track and EP title touch-base "Arithmatik" is the centerpiece of the disc, referencing a lover's favorite film ("flickering"); it's utterly hypnotizing with its big six string chorus swell and "No, Yes, No, Yes" refrain. "What did they say about you? I can't really recall." If Calaba wasn't so convincing a singer, so in character and confident, this would all come off as empty or "trying to look cool," as the next track, "Let Ken Green" says. Instead, the effect is haunting, while still being accessible.

Comparisons have been made to Coldplay, and the mood might be similar. But a leaner, meaner version of Peter Gabriel's fluid creativity and rhythmic singing comes more to mind midway through grand guitar gusts like "Say Hello" and "Foreign Snow." While their songs in the future could probably use a bit more diversity in tone and tempo, the emotional precision and sweep of tracks like opener "With You" just makes one anxious for more of anything the band have to offer.